Staking
What Does Proof-of-Stake (PoS) Mean?
Which Coins Are Good For Staking?
What Are The Best Staking Coins
Cryptocurrency Staking Comparisons
Cryptocurrency Staking Overviews
1. Solana (SOL)
2. Cardano (ADA)
3. Ethereum 2.0
4. Polkadot (DOT)
5. Binance Coin (BNB)
Frequently Asked Questions
Conclusion
Cryptocurrency staking is a popular way to earn a passive income through validating and verifying transactions on a blockchain network. The staking rewards vary for each project with several new Proof-of-Stake (PoS) projects. This article will list the best coins to stake based on their popularity and estimated staking rewards.

What Does Proof-of-Stake (PoS) Mean?

Proof of Stake or 'PoS' is a network consensus where participants contribute to the security of the blockchain network by validating and verifying transactions. It's an alternate model to resolve the "double-spend" problem and an energy-effective alternative to the Proof-of-Work (PoW) model used by Bitcoin.
PoS stake coins allow users to participate in network validation by staking their tokens to become validators. Each blockchain has a minimum staking amount that must be locked up for a set period of time. In return, the participants are issued with new tokens referred to as 'staking rewards' for their contribution to the security and governance of the project.

Which Coins Are Good For Staking?

The best coins for staking are generally the tokens with a high return on investment with long-term project stability and growth. Staking involves making a financial investment into a token, whose value might decrease during the staking period. Staking well-established tokens by market capitalization with a high percentage of staking participants in the project is a reliable and long-term strategy that is suitable for all types of investors.

What Are The Best Staking Coins

Based on our research, these are the best Proof-of-Stake (PoS) coins to earn staking rewards:

Our picks for the best coins for staking based are listed below to provide a comparison of their estimated reward (APY), the total staked amount and percentage of eligible tokens staked. The below data is accurate as of the time of writing and subject to change.

Solana is a third-generation blockchain that's highly focused on providing a fast and efficient blockchain network. The price of Solana has increased ten-fold in the last few months and boasts a the largest amount of staked tokens currently worth more than USD 96 Billion. The drawcard for the explosion in its rapid adoption is due to having one of the fastest blockchains with over 65,000 TPS and lower transaction costs. 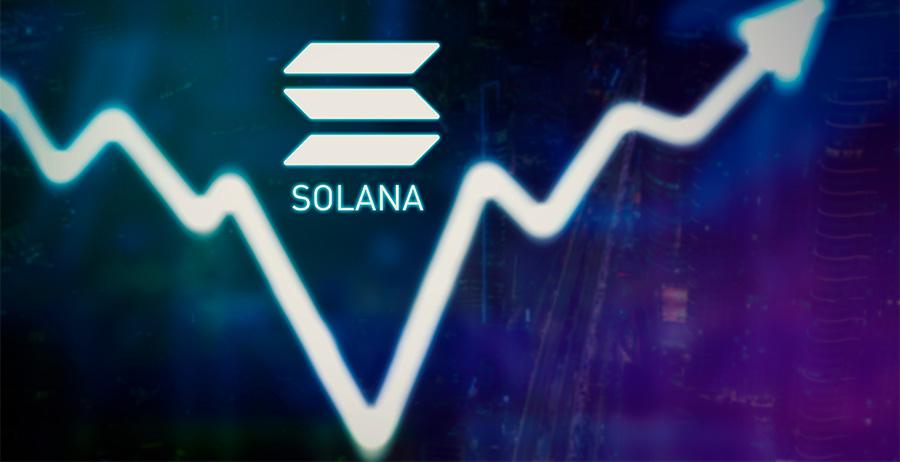 Solana uses a proof-of-stake consensus mechanism that allows SOL holders to stake their tokens in a validator pool. Participants can earn SOL staking rewards of 6.9% APY for their contribution to securing the network.
Solana is one of the best tokens to stake due to its popularity among investors. At the time of writing, Solana is the largest PoS token in terms of market capitalization at 68 Billion with approximately 77.93% of Solana owners staking their SOL tokens according to research. This represents one of the largest percentages of available tokens and reflects a strong project with long-term potential.
Popular methods to stake Solana tokens include the SolFlare or Phantom wallets. These software wallets allow participants to find and join validator pools to earn SOL staking rewards. Alternatively, the popular cryptocurrency trading platforms such as Binance, FTX and Kraken support SOL staking to earn rewards. 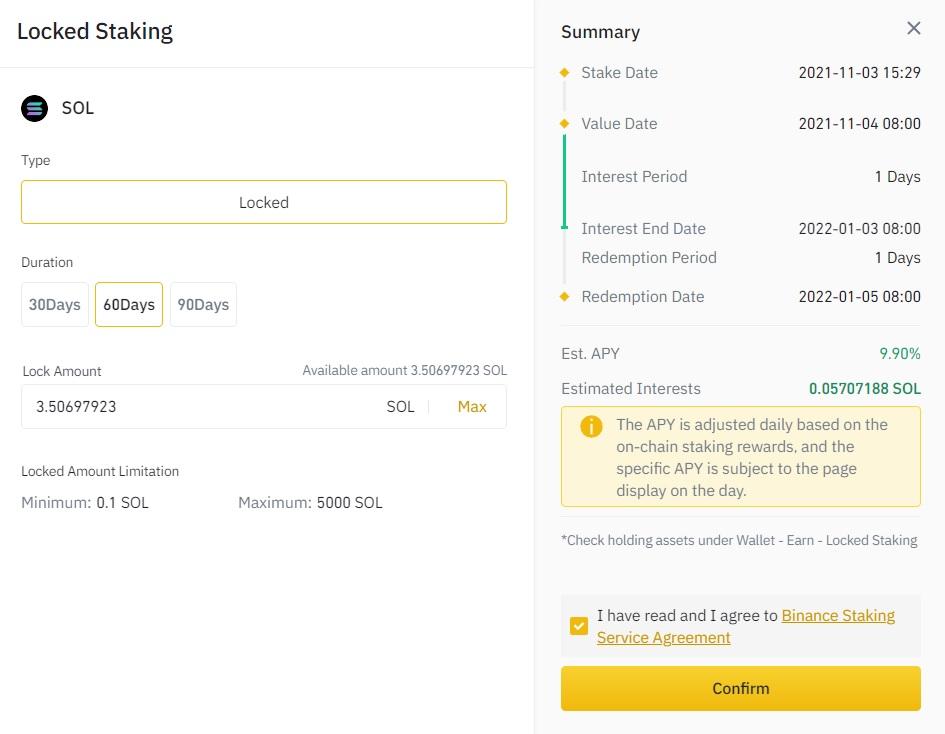 Staking Solana on Binance.
Binance users will need to lock up the tokens for a fixed amount of time. For example, staking Solana on Binance is locked for 30, 60 or 90 days. The longer terms offer higher staking rewards of 9.20%, 9.90% and 11.50% APY. There is a minimum staking amount of 0.1 SOL on Binance.
Overall, Solana is our top pick for the best token to stake. Solana is the 4th largest crypto asset in market capitalization, offers competitive staking rewards and has a high percentage of owners invested in the network. SOL is a long-term project that is continually innovating and developing behind the scenes such as its newly launched NFT marketplace.

Cardano is a third-generation blockchain that's a viable contender to Ethereum due to its academic and research-oriented approach. Cardano is currently the 6th largest cryptocurrency in terms of its market capitalization with significant investment from retail buyers.
The Alonzo upgrade introduced smart contract functionality which has opened the door for new blockchain applications, including DeFi and NFTs. However, the recent Shelly upgrade allowed users to earn ADA staking rewards between 4% and 6% APY.
According to research, Cardano investors are choosing to stake their ADA tokens with an estimated $48 Billion locked in. This equates to approximately 70.79% of all eligible tokens in circulation. Similar to Solana, the high percentage of staked ADA tokens reflects a strong project and a top coin to stake for long-term rewards.

Source: www.stakingrewards.com
The best places to stake Cardano for beginners are using crypto exchanges such as KuCoin, Binance, or Crypto.com. Each platform offers a low barrier for entry with a similar range of staking returns per year. Certain exchanges will impose lock-up periods which can restrict access to the tokens. For example, Cardano staking using a Binance fixed term is 30, 60 and 90 days. The benefit of locking ADA tokens is the higher staking returns up to 8.38% APY. However, the staking pools are often sold out.
Alternatively, Cardano-supported wallets such as Daedalus or the Yoroi wallets can be used to stake ADA. Tokens within the Daedalus wallets are staked on the network and offers an average of 5.9% APY. The ADA rewards can range between 4% and 6% based on the number of participants. Running a Cardano staking pool will offer higher rewards compared to joining a pool, although requires technical expertise.
Overall, Cardano is a top coin for staking that offer an attractive ROI for investors and is a stable project with long-term development ambitions and strong support within the ADA community.

Ethereum is undergoing a series of upgrades and transitioning from a PoW to a PoS consensus mechanism. Although the entire process will take until 2023, Ethereum has activated the beacon chain, allowing users to stake Ethereum 2.0 tokens to earn rewards. While staking is possible, Ethereum will run concurrent chains until it reaches serenity. This means that PoW and PoS will be available, most probably until 2023, when Ethereum will transition 100% to PoS network.

At the time of writing, there are over 8 million ETH tokens staked on the network between a total of 253,716 validators. The current return on investment for staking Ethereum 2.0 is 5.4% APY.
The more users that become validators decreases the APY, however, this has not had any effect on the increasing number of individuals locking up ETH over the last few months. This is a strong sign that investors are choosing to stake Ether in anticipation the price of the asset will be significantly higher once the network upgrade is completed.
Ethereum has a minimum of 32 ETH required to become a validator node. The alternative method is to stake on cryptocurrency exchanges which are easier for people who don't have 32ETH or extensive knowledge about setting up a client node and running the process. ETH2.0 staking pools often have a minimum requirement of 0.5 ETH which is more accessible for investors.
Cryptocurrency exchanges such as Coinbase and Kraken support ETH.20 staking without a minimum deposit amount. However, there are management fees of 25% and 15% respectively which decreases the user's total ETH staking profits.

Polkadot is known for connecting blockchains creating perfect interoperability. Staking DOT has also become a popular activity for holders as they can make a passive income in a safe and popular blockchain. Polkadot is currently the 4th largest PoS coin by staked value in USD. Furthermore, the value of the network has appreciated to an all-time high reaching USD $53 at the time of writing.

Source: www.stakingrewards.com
Staking on Polka is called nominating where the process interacts entirely with the relay chain to approve transactions. In that process, nominators assign their stakes by delegating DOT tokens to validators. Staking or bonding directly on Polkadot requires a minimum of 120 DOT tokens. However, there are discussions to decrease the minimum value. Once tokens are bonded in the network, selecting validators is similar to other PoS networks.
The current estimated return for staking Polkadot is 14.5% APY, which is a higher return on investment compared to other networks such as Solana, Cardano and Ethereum 2.0. Exchanges such as Binance can offer a higher APY between 11.51% and 16.62% but are conditioned with a lock-up period of 30, 60 or 90 days. DOT can also be staked using the official Polkadot JS which requires an online connection to the Polkadot main-net.

A major benefit of staking Polkadot compared to other PoS coins is staking from a reputable hardware wallet. Staking with a Ledger Nano X does require the individual to purchase a hardware wallet, however, the private keys are held by the individual and by a centralized exchange or software wallet.
In summary, Polkadot is a serious blockchain project which has been steadily climbing in network value. The above-average staking returns and the ability to earn DOT rewards using a hardware wallet make Polkadot one of the best coins to stake to earn a passive income.

Binance is the largest cryptocurrency exchange by volume which launched BNB, the native token of the Binance Chain. The token has many utilities such as offering a 25% discount on trading fees for users that pay their fees with BNB.
The coin originally started as an ERC 20 token before porting to the Binance Smart Chain (BSC), which is directly competing with Ethereum's blockchain by offering a higher transaction output. Data from BSC indicates a total of 10 million transactions daily, whilst Ethereum averages only 1.3 million.
Users can stake Binance on the Binance website, as it offers an attractive APY which increases as the lock-up period gets longer. For a 90-day fixed period, Binance users can earn up to 8.69% APY which is attractive compared to other PoS tokens. Alternatively, users can use external wallets that support the BEP-2 token standard, such as TrustWallet to stake BNB tokens.
The minimum staking amount for Binance Coin is 0.1 BNB, which makes it suitable for anyone that wants to HODL tokens and earn passive income in the 3rd largest cryptocurrency in the world.

The top 5 coins with the highest amount locked-in for staking is Solana ($96 Billion), Cardano ($48.8 Billion), Ethereum 2.0 ($36.5 Billion), Polkadot (33.8 Billion) and Avalanche (19 Billion) at the time of writing.
The blockchain project within the top 10 assets by staked volume that has the highest staking reward is Polkadot. Staking DOT token has an estimated reward of 13.63% APY, which is followed by Solana at 6.89% APY.

Kevin GrovesKevin is the founder and chief editor at hedgewithcrypto that he started in 2019 which has reached over 1.5 million visitors worldwide. He is passionate about cryptocurrency as an emerging technology and is heavily involved in the fast-growing fintech space. A professional trader growing his portfolio since 2016, he has a strong understanding of investing in the market using exchanges, brokers and derivatives platforms. After leaving his full-time job at the start of 2021, his mission today is to share information guides on crypto and to find the best exchanges via hedgewithcrypto through detailed reviews and comparisons. To stay up to date with the latest exchange reviews and guides on Bitcoin, trading, DeFi, staking and more, follow us via our newsletter and social media channels.