Staking Cosmos (ATOM) is one of the top coins for staking using an exchange or wallet to earn passive rewards of up to 10% per year. Here is our list for the best places to stake Tezos which includes crypto exchanges and wallets. Our research is based on assessing the platform's features, estimated annual yield, fees and security.

Best Places To Stake Cosmos In 2022

Based on our reviews, the best places to stake Cosmos are:

What Is Cosmos (ATOM) Staking?

Cosmos (ATOM) is a popular digital currency that uses a hybrid Proof-of-Stake protocol to secure its network and allow Cosmos investors to earn a passive income of up to 10% per year. Investors are rewarded by holding storing the coin and participating in validating transactions on the network through 'validators'. A small reward is then distributed to the owners (or 'delegator') via the validators at the set commission rate.

How To Stake Cosmos (ATOM)

For individuals that want to stake crypto, one of the easiest ways is to use the same exchange they purchased ATOM. They will be comfortable with the exchange’s design and likely already have performed due diligence on its features and other relevant criteria.

To stake Cosmos (ATOM) coins, follow these steps using a Ledger hardware wallet as an example:

For a full step-by-step guide on how to stake cryptos, read our article that explains the best methods of staking and the criteria to weigh up before choosing a staking platform.

This comparison guide provides an overview of where to stake Cosmos (ATOM) to earn rewards and a passive income.

Binance is the largest cryptocurrency exchange by trade volume and has millions of users across the globe. The exchange offers feature-rich products including cryptocurrency leverage trading, lending service and earning rewards with crypto interest accounts.

Cosmos staking has an estimated reward between 9.47% and 12.78% to earn extra income by depositing and holding ATOM coins in a Binance wallet. The user's Cosmos balance is assessed each hour to calculate the rewards. Cosmos staking rewards are paid every day. The higher fixed rate staking pool for Cosmos is often sold out as it's on a first-in, first-serve basis.

Binance investors must have at least 1 ATOM to qualify for staking rewards. All profits earned are shared with Binance users to maximize staking rewards. Binance staking is not available in all countries, check the website for details.

The benefit of staking ATOM coins on Binance is the ability to stake Cosmos while waiting for a trade opportunity. Users can benefit from the staking rewards in addition to potential trade profits on the spot or margin exchange. Once a position is filled, the staked balance and associated rewards will automatically adjust to reflect the available balance. There is no fixed plan and users can switch the staking funds to trade Cosmos on Binance. Overall, Binance is one of the best platforms to stake crypto for its flexible plans and zero staking fees.

To stake Cosmos (ATOM) on Binance, follow these steps:

Coinbase is a popular cryptocurrency exchange that is trusted by more than 35 million people in over 100 countries worldwide to buy, sell, store, use, stake and even earn interest on Bitcoin and other cryptocurrencies. Coinbase has emerged as a popular secure wallet and trading exchange to buy Bitcoin using a credit card or bank transfer.

Coinbase has introduced staking for its US Customers only with staking rewards on Cosmos (ATOM) up to 5% APY. The reward percentage is not fixed and varies over time based on the staking profits distributed by validators on the Cosmos network. Rewards are paid directly into a Coinbase wallet where the users funds are stored. 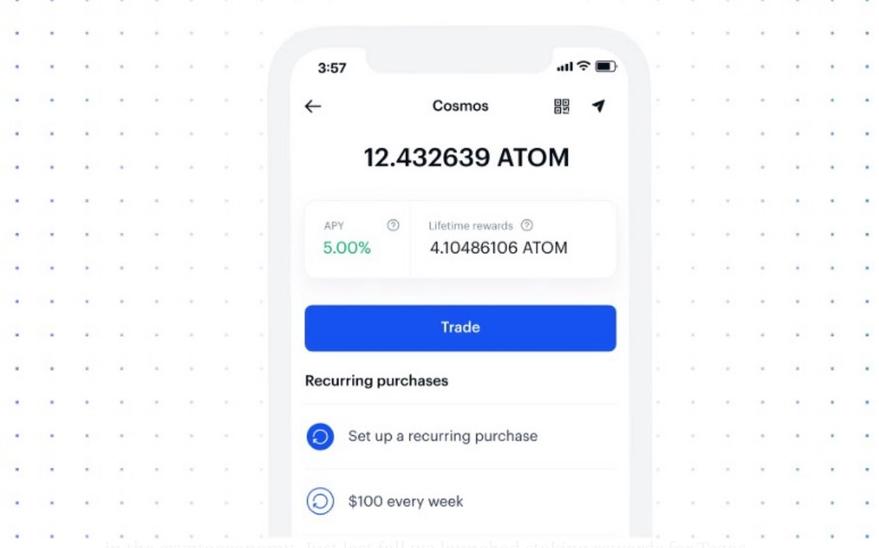 To earn staking rewards, Cosmos coins need to be stored in a Coinbase wallet. There is a minimum staking amount of 1 ATOM that must be within the wallet to earn rewards. Also, the staking rewards option must also be toggled on in the 'Settings' menu under 'Financial Services'.

Staking ATOM coins on Coinbase will incur a small commission fee. The amount is deducted from the staking rewards received from the Cosmos network. This results in a slightly lower reward rate of 5% compared to the other staking platforms mentioned herein.

Cosmos coins stored on a Ledger wallet can be staked through the Ledger Live application to earn a passive income by participating in the Cosmos network via delegation. In return, users that stake Cosmos are rewarded with an annual yield of 8% to 10% APY, minus validator fees.

The easiest way to stake Cosmos using a Ledger wallet is to delegate your staking power on your behalf. You still retain ownership of ATOM coins while staking the asset safely on a hardware wallet. Delegating Cosmos and participating in the proof-of stake protocol allows investors to earn rewards for assisting in the protocol.

Investors that stake ATOM on a hardware wallet have the option to earn rewards using two different methods:

Long-term investors and holders of Cosmos should consider staking their investment on the Ledger Nano X hardware wallet to accumulate additional ATOM coins, with the added security of maintaining ownership and up to 10% ROI.

Atomic Wallet is a decentralized online cryptocurrency wallet available on desktop and mobile devices that supports more than 500 coins and tokens. The wallet is suited to crypto investors of all experiences and provides a simple, safe and convenient means to store digital assets.

The expected ROI for staking Cosmos (ATOM) in an Atomic Wallet is 10% APY which is in the upper range of rewards compared to cryptocurrency exchanges and wallets that allow staking. To be eligible for the staking rewards, a minimum amount of 1 ATOM needs to be held in the Atomic Wallet.

Unlike the Ledger Live Application, there is no hardware wallet integration available, so it is important to keep safe the back-up pass phase and password as you are solely responsible for the wallet's security. In our opinion, we prefer the additional security benefits of storing the asset on a hardware wallet while enjoying Cosmos staking rewards.

To stake Cosmos (ATOM) coins in an Atomic Wallet, follow these steps:

Guarda is a secure crypto wallet that allows individuals to buy, store and sell digital currencies such as Bitcoin, Ethereum and thousands of other coins. The wallet is multi-currency and non-custodial which means investors keep hold of their Bitcoin private keys. The wallet is available using a web, desktop, Chrome Extension or mobile device.

Guarda Wallet supports 50 blockchains and over 10,000 tokens that can be bought, exchanged, staked, delegated, borrowed and transfer to smart contracts. Up to 10 coins including ATOM are available to be stored on a Guarda wallet to earn staking rewards.

Investors that use the Guarda wallet can participate in the Cosmos network by contributing to the security of the ecosystem using delegation. The reward for delegating a deposit to a validator is up to 10% per annum.

Where To Buy Cosmos?

The best place to buy Cosmos (ATOM) is using fiat to crypto exchange to convert local fiat currency into digital assets. Alternatively, using one of the best exchanges to buy crypto or an instant crypto-to-crypto swap platform can also be used to swap another coin to Cosmos.

Delegating Cosmos to an exchange comes with staking risks as the investors do not hold control over the private keys which provide access to the funds. Exchanges can be prone to online theft and fraudulent activity which can result in the potential loss of funds.

Furthermore, staking platforms that allow the users to select a validator or baker can introduce the risk the provider does not pass on the full staking rewards to the delegator. The fees can fluctuate from 1% and 25% and depending on the validator.

Users can earn Cosmos (ATOM) staking rewards with Coinbase by holding or purchasing the coins on the exchange to be staked on your behalf. Investors maintain ownership of the ATOM coins within a Coinbase wallet and earn rewards by delegating staking power to Coinbase.

Coinbase is a worldwide cryptocurrency exchange that offers its staking service globally in countries such as Belgium, France, the Netherlands, Slovakia, Spain, the UK and the US (except for residents in New York and Hawaii).

The best way to stake Cosmos (ATOM) is using a Ledger hardware wallet. The safety of funds is most important and Ledger allows you to maintain control over the coins and the private keys at all times.

To conclude our article on how to stake digital assets such as Cosmos (ATOM), we have assessed and compared the most popular cryptocurrency exchanges and hardware wallets to store ATOM coins to earn staking rewards.

While there are subtle differences between the platforms such as the reward percentages and fees to be aware of, in our opinion, staking ATOM using a Ledger wallet is a safe and profitable way to earn extra ATOM coins without having to sell your coins.