Blockchain technology and cryptocurrencies have a bright future ahead. But alongside the success stories, there have been many failures and coins that have gone bust. Since Bitcoin was created in 2009, thousands of cryptocurrencies have been launched with the hopes of bringing new utility to end users. Unfortunately, not many survive beyond launch and those that do can still run into difficulties.

In this guide, we will examine the most high-profile failures, look into the reasons why cryptos have failed in the past, and provide some key tips to help you avoid buying failed coins in the future.

How Many Cryptocurrencies Have Failed?

While it is difficult to confirm an exact number, between 1,700 and 2,500 cryptocurrencies are likely to have failed and disappeared from the market. Popular examples of coin failures include LUNA, UST, BCC, and SQUID tokens. Some of the reasons for these cryptos to fail include abandonment by the developers, lack of investment and trading volume, rug pulls, and hacks.

What Are Dead Coins?

Most platforms define failed cryptocurrencies as ‘dead coins'. Dead coins are typically cryptos that are associated with either an abandoned project, a scam, a lack of liquidity, or a combination of all three. It is important to be aware of dead coins as these digital assets can continue to exist within the blockchain ecosystem. Although all value has been stripped, dead coins can still be listed on exchanges and coin aggregators, which creates a hazard for investors.

The table below outlines the most high-profile failures that the cryptocurrency industry has ever witnessed.

What Are The Biggest Cryptocurrencies To Have Failed?

LUNA was the native cryptocurrency of the Terra blockchain; a network designed for the creation and utilization of stablecoins. In November 2021, LUNA reached an all-time high market cap of $44.8 billion and a price of $116. However, in May 2022, Terra’s entire ecosystem collapsed. As a result of extreme selling pressure, Terra’s largest stablecoin, TerraUSD (UST), began to de-peg from $1.

As an algorithmic stablecoin, LUNA was used to stabilize and defend the peg. However, the Terra Foundation was unable to regain the peg, and eventually, the price of both UST and LUNA collapsed. LUNA was quickly removed from most exchanges. The fall of LUNA remains one of the biggest, if not the biggest cryptocurrency failure in the history of the crypto market. It was so large that it was dubbed ‘Mt. Gox 2.0’ by members of the crypto community.

UST was the leading stablecoin of the Terra blockchain. Thanks to consistent stability, the coin was integrated into several CeFi platforms and DeFi protocols. However, the 1:1 USD dollar peg of the coin was attacked in May 2022, which led to one of the greatest crypto failures ever witnessed.

UST’s de-peg was caused by a large UST sale that took place on a decentralized stablecoin exchange, known as Curve. Many believe that the sale was an intentional attempt to destabilize the entire Terra ecosystem, which is what eventually happened.

The failure of UST resulted in the abandonment of the entire Terra network, including the native coin, LUNA. TerraUSD was removed from all major cryptocurrency exchanges.

As a result of the hype associated with the newly released TV series, Squid Game, a set of unknown developers released an accompanying Squid Game token. After launching in October 2021, SQUID climbed 23,000,000% in a single week, before quickly collapsing back to 0. 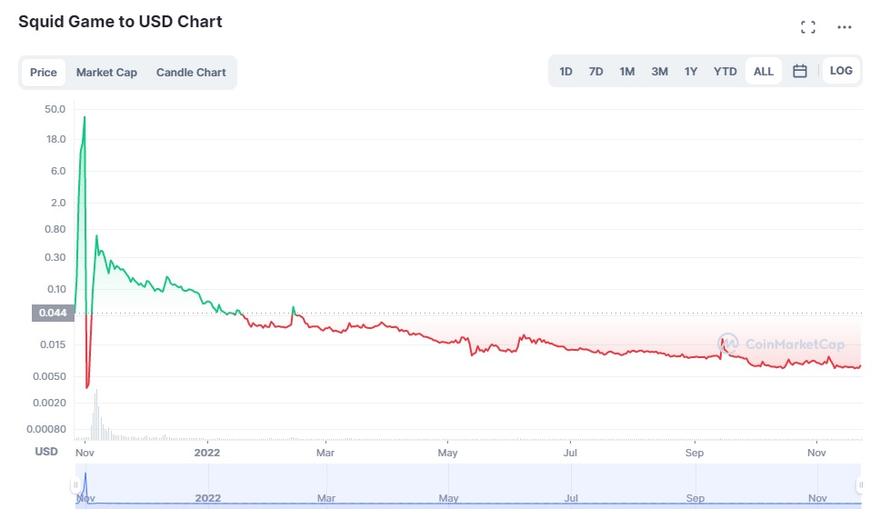 SQUID price chart after crash that went from circa $50 to $0.

Marketed as a utility token for a play-to-earn game, the developers of SQUID used a backdoor within its code to access funds held within a decentralized exchange liquidity pool. After the malicious creators exited with liquidity, the price of the coin collapsed; a move more commonly referred to as a ‘rug pull. According to reports, the developers of SQUID stole approximately $3.4 million worth of assets from investors.

BCC was the native token of BitConnect, a platform that allowed investors to earn interest on Bitcoin. Investors could swap BTC for the BCC token and earn interest while holding it. It was claimed that high returns were the result of a proprietary trading bot that could spot opportunities in the market. At its peak, the BCC token reached $400 per token. 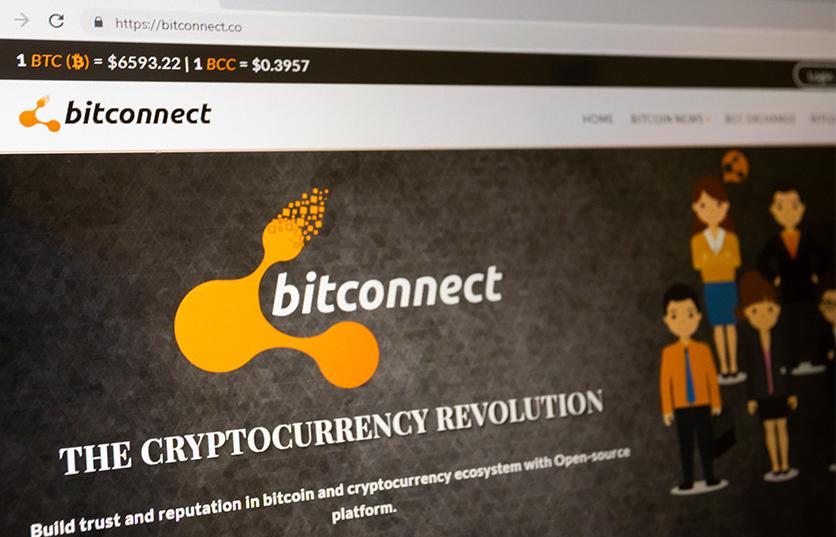 However, in January 2018 the platform was quickly closed by authorities due to concerns that it was actually a front for a Ponzi scheme. The extent of the Ponzi scheme was revealed in early 2022, when the founder, Satish Kumbhani, was formally indicted by the SEC and charged with a range of fraud charges.

After the closure of the exchange, the BCC token plunged 90% and was quickly delisted from all crypto platforms, leaving thousands of investors holding the dead coin.

In 2021 a cryptocurrency called SafeMoon, also known as SAFE, was released and quickly garnered attention on social media. Thanks to a well-implemented marketing scheme, that involved getting the backing of several celebrity figures, the SAFE token became widely known within the crypto industry.

However, in 2022, several lawsuits were filed against both the founders and promoters of SafeMoon for artificially uplifting prices. Although the coin is still tradable and continues to hold a small community of followers, the coin has been removed from the majority of platforms.

Launched in 2016, Ethereum network members launched one of the first ever decentralized autonomous organizations (DAOs). Known as ‘The DAO’, or Genesis DAO, the group utilized a native token, to generate funds that could then be used to support new ideas or protocols.

The plan was to allow token holders to vote for the most promising projects and then receive a proportion of any profits generated. Unfortunately, after only 3 months of operation, The DAO was hacked and 3.6 million ETH was drained - worth $70 million at the time.

To reverse the transaction and, therefore, refund the lost ETH, it was agreed that the Ethereum blockchain would undergo a hard fork. However, this did not sit well with a large percentage of Ethereum users as it was seen to go against what blockchain technology stands for.

Alongside disagreements, The DAO token was delisted from Poloniex and Kraken exchanges and then served a lawsuit from the SEC stating that The DAO had violated securities laws. The token was eventually abandoned altogether in 2017.

SpaceBIT was one of the crypto industry’s earliest failures. The project initially garnered huge publicity in 2014 on the back of broad ambitions to make digital currency transactions accessible from anywhere on the globe. Marketed as a decentralized space company, satellites were even launched into space to facilitate the infrastructure of the network.

Finally, we have GetGems, another high-profile project that was focused on disrupting the social media industry. Built using blockchain technology, GetGem’s plan was to develop a social media platform that allowed users to generate revenue from watching advertisements.

Although the hype around the project was high, a crowd sale in late 2014 fell flat, raising only $111,000. Shortly after the crowd sale, the momentum for the project started to dwindle and updates from the project eventually stopped altogether in 2017.

Why Do Cryptocurrencies Fail?

Cryptocurrencies and crypto projects fail for a host of different reasons. By understanding what those reasons are, crypto investors can place themselves in a much stronger position when building a crypto portfolio. The most common reasons that have caused crypto projects to fail are:

With hundreds of failed cryptocurrencies littering the market, it is useful to know how to avoid projects that may fail in the future. Although not all dead coins are predictable, there are several red flags to look out for:

Yes, there are more than 1,700 failed crypto projects that have resulted in investors losing their money. The reasons for these failed coins include a lack of liquidity, inexperienced founders, lack of investment, and scams. Recent examples of cryptos that have collapsed include LUNA, UST, BCC, and Safemoon.

It is extremely difficult for a cryptocurrency to completely disappear. All cryptos are created on a blockchain. Even if no one is trading the asset, the smart contracts for the coin or token will remain to exist on the associated blockchain.

Although a cryptocurrency project may fail, some traders and investors may choose to leverage any associated market volatility to earn a profit. Even a small number of market participants can result in a failed cryptocurrency retaining some value.

There are at least, 1,500 cryptocurrencies that have failed since 2011; a significant number when compared with the lifespan of the crypto industry. Prolific examples of coin failures include LUNA, UST, BCC, and SQUID, which exemplify the risks associated with investing in crypto. However, those risks can be mitigated by understanding the red flags to look out for.

Before investing in a cryptocurrency remember to check the whitepaper, market liquidity, and utility. If the whitepaper is well written, liquidity is high, and utility is clear, keeping a close eye on a cryptocurrency’s associated social media platforms should help to provide warning signs if a project is close to failure. Although not guaranteed, understanding these red flags can greatly reduce the chances of investing in failed, or failing, cryptocurrencies.