Home
Staking
Where To Stake NEAR Protocol: 5 Best Places In 2022

Where To Stake NEAR Protocol: 5 Best Places In 2022 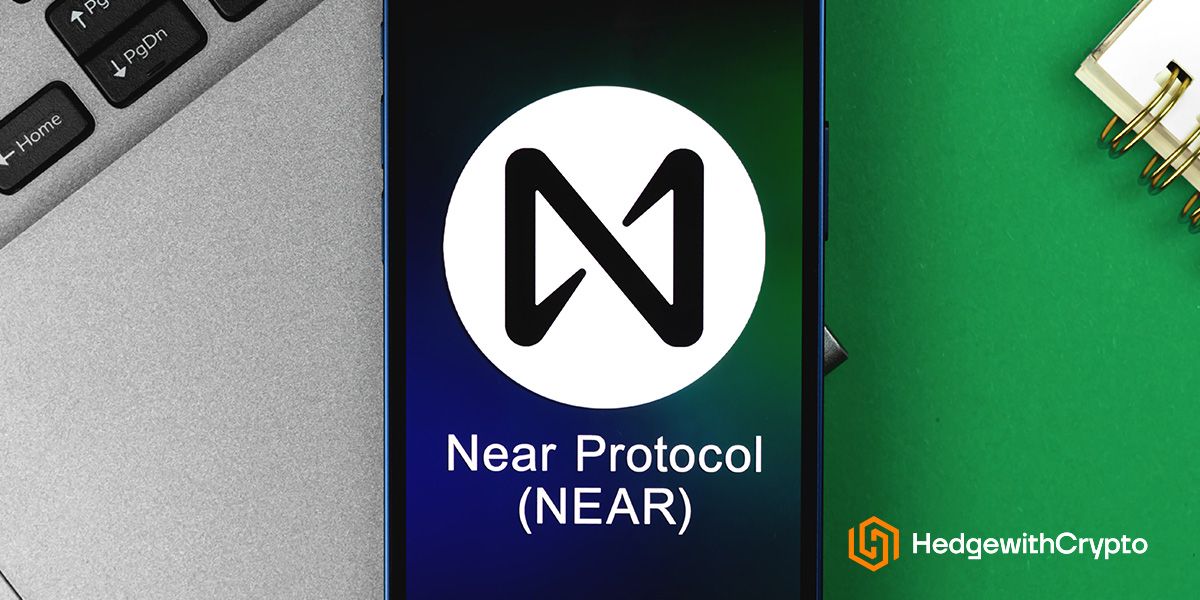 The anticipated growth of the NEAR Protocol alongside web3 as well as its relatively non-volatile price action of the coin has attracted many crypto investors. NEAR operates on the Proof-of-Stake (PoS) protocol which means that it can be staked on-chain wallet or on supporting cryptocurrency exchanges. In this article, we explain how to stake NEAR and the best places to stake to do so.

Best Places To Stake NEAR Protocol In 2022

Based on our reviews and comparisons, these are the best places for staking NEAR to earn passive rewards:

This post contains affiliate links with our partners who may compensate us. Read our disclaimer for further information.

What is NEAR Protocol?

The NEAR Protocol was established in 2017 with the goal of solving common problems that other smart contracts-supporting blockchains failed to address, including low transaction speeds, low throughput, and poor cross-compatibility with other blockchains. NEAR is the native token of the NEAR Protocol and is primarily used for incentivizing nodes and powering transactions on the platform.

The NEAR Protocol is a Proof of stake (PoS) blockchain meant to improve scalability and reduce costs. The blockchain utilizes a unique technology called 'sharding' that essentially separates strings of data to speed up processing, with the consensus mechanism called ‘Doomslug’.

Can You Stake NEAR Protocol?

The NEAR token operates on a Proof-of-Stake consensus protocol to validate transactions. Token holders can stake their crypto to obtain rewards up to 30% APY while contributing to the security of the network. Holders of NEAR who stake their tokens and therefore validators, contribute to the governance of the network and are rewarded with staking payments. Several platforms and crypto exchanges support the staking of NEAR as a delegator. At the time of writing, Near Protocol has a staking market cap of approximately $1.5 billion with 39% of token holders staking the coin.

NEAR can also be staked as a validator on the network but requires considerable capital but also advanced technical expertise. Therefore, becoming a delegator on the NEAR network is a more convenient option for passive cryptocurrency investors. Validators receive NEAR tokens from delegators, helping the validator's staking pool to be chosen and start contributing to the operation of the NEAR Protocol. Token rewards are then distributed to the validator account and delegators proportionally. In this article, we’ll take a look at the best platforms to choose for staking NEAR tokens.

How Much Can You Earn Staking NEAR?

The rewards on staking are represented in percentage terms by a term called Annual Percentage Yield, APY. This APY is dynamic and a calculated projection from the rewards historically received. The rewards are decided by factors such as the method of staking and the platform used. The amount of staked tokens, along with the commission charged by the validators, also play an important role in deciding the APY.

While the APY for staking keeps on changing, the average annualized staking benefit across most exchanges revolves around 6-8% APY for staking NEAR. This figure is an approximate average though, as Binance offers up to 23.76% of yield on its locked staking products at the time of writing and is a popular staking coin for this reason.

How to Stake NEAR?

There are various ways to stake NEAR such as becoming a validator, using an exchange, or using a wallet. Among all of these, using a trustworthy crypto exchange is the easiest and most convenient way to stake NEAR or any crypto for that matter.

Here’s a step-by-step process on how to stake the token NEAR using the staking platform, Binance:

Binance is one of the most well-known and reputable crypto exchanges in the world. The robust and feature-laden platform provides over 30 million investors and traders with exceptional crypto products and services. NEAR became a staking option for Binance customers in October 2021. Currently, Binance offers Locked Staking for NEAR tokens which will remain inaccessible for the duration. Staking durations and their corresponding Annual Percentage Yields (APYs) are listed below:

The staking payments for locked term durations range between 10.79% APY and 30.99% APY and are fairly reasonable compared to other platforms. Users should that the on-chain staking rewards are adjusted daily. When the locked-in period ends, the users NEAR tokens will be automatically transferred into the wallet. The principal balance of the NEAR tokens can be redeemed prior to the cessation of the duration, however, the staking rewards will be deducted.

Prospective traders who want to stake their NEAR tokens should note that the minimum amount that can be staked depends on the duration of staking. With the minimum limit ranging from 0.001 to 0.1 NEAR tokens, investors with small amounts of capital can take part in earning passive rewards.

Investors located in the United States of America (USA) should note that staking NEAR tokens on Binance.US is currently not supported. As such, an alternative crypto exchange such as Huobi may be considered.

KuCoin is a highly popular crypto exchange present in more than 200 countries. The exchange grew exponentially considering it was launched in 2017. It is often referred to as the People's Exchange since it is trusted by a quarter of crypto holders worldwide.

Users can stake their NEAR tokens on KuCoin and earn rewards with an estimated APY of 11.84% and 7.25% on terms of 14 and 7 days, respectively. A flexible wallet is available where a lower APY of 5.17% is offered in exchange for the option of redeeming NEAR tokens at any time.

Huobi Global was founded in 2013 and has become one of the largest crypto exchanges by trading volume and user base. The Hong Kong Stock Exchange listed platform provides customers around the world with easy access to over 560 digital assets, a variety of trading markets including spot, margin, and futures, and staking.

The estimated APY for staking NEAR tokens is 8.82%. If 100 NEAR tokens are delegated to staking pools then the passive rewards are approximately 0.0241 NEAR each day. The APY rewards are not as lucrative as Binance's offering. Furthermore, a minimum of 1,300 NEAR tokens are required to get started, and this is a significant amount of capital that is needed upfront. 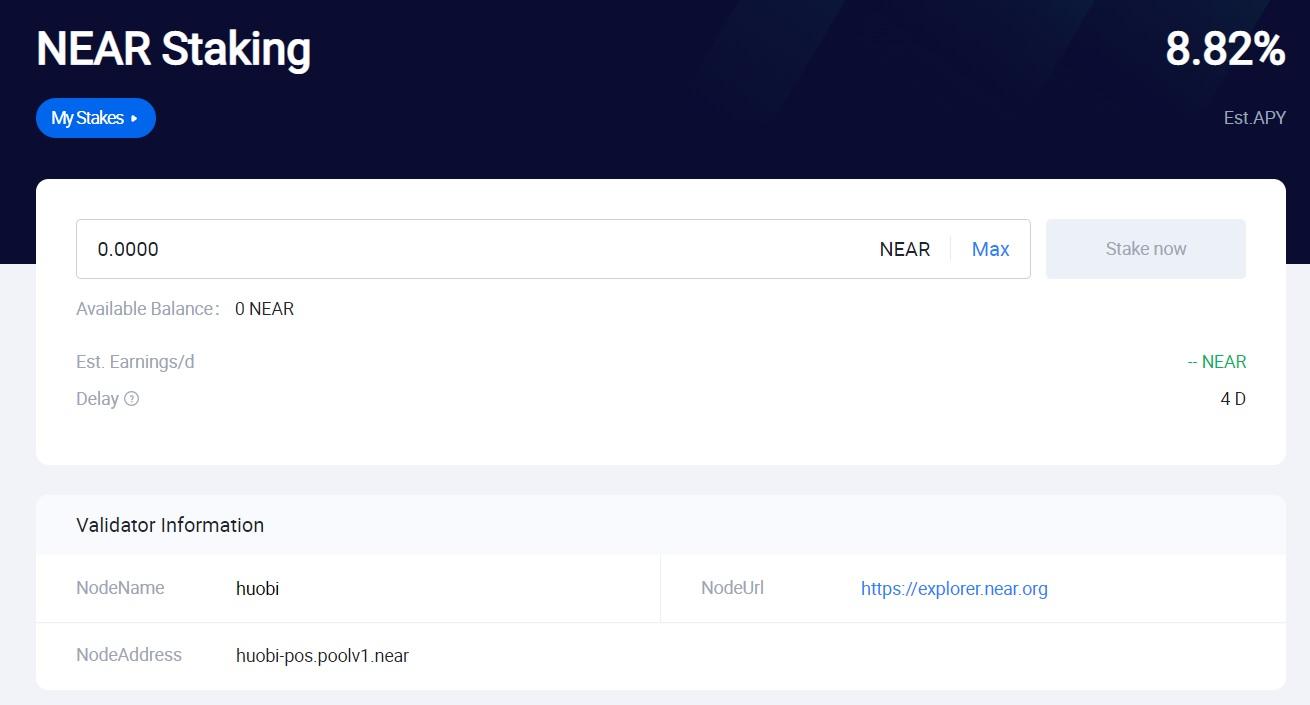 At the time of writing, NEAR tokens will be locked for a period of 4 days and cannot be redeemed by the user for other purposes such as trading or withdrawing them to an external wallet. The advantage, however, is that staking rewards is generated daily and distributed to the investor's wallet the following day. Another important aspect to consider with Huobi is that it provides a link to the validator node that most other exchanges don’t provide. This link can be inspected using Blockchain Explorer. Meaning the delegated tokens on the network will be completely transparent and lowers the risk of scams.

Comparison of Exchanges To Stake NEAR

Staking NEAR Using A Wallet

Staking NEAR tokens using a supporting wallet is a viable option for those who want to mitigate some of the potential risks associated with staking. Whilst the wallet holder retains complete ownership of the NEAR tokens, the staking process is a little more complicated than using a crypto exchange that provides the staking infrastructure. This is primarily because the user is responsible for choosing a validator to delegate the NEAR token.

Here are a few aspects to assess when deciding on a validator:

Which Crypto Wallets Support NEAR Staking?

Cuvar Wallet is a popular wallet for staking NEAR tokens. The wallet app can be downloaded to iOS and Android mobile devices. Seed recovery, biometric login, and a strong password are security measures that will need to be set up.

The minimum amount of tokens staked is 0.1 NEAR. Users have the option to deposit NEAR or buy tokens using several fiat currencies including AUD, GBP, CAD, and JPY. To commence staking, users will need to browse and select a validator from the list. In doing so, users will be able to view validator transaction fees which typically range between 1% and 10%. Once a validator is set, the number of NEAR tokens can be entered and the delegation confirmed. Overall, Cuvar is a good NEAR wallet for staking.

Rather than downloading an app for a mobile device, the Sender wallet provides NEAR holders to stake their tokens using a Chrome extension. Once the extension is downloaded, an account can be made and funded with NEAR tokens. Similar to Cuvar, a validator will need to be selected in order to commence NEAR staking. The staking payouts for some validators are quite lucrative where they can be as high as 20% APY. Enter the amount of NEAR to stake and confirm the transaction. The NEAR wallet is ideal for beginners that can also explore the wider ecosystem of the blackchain protocol. 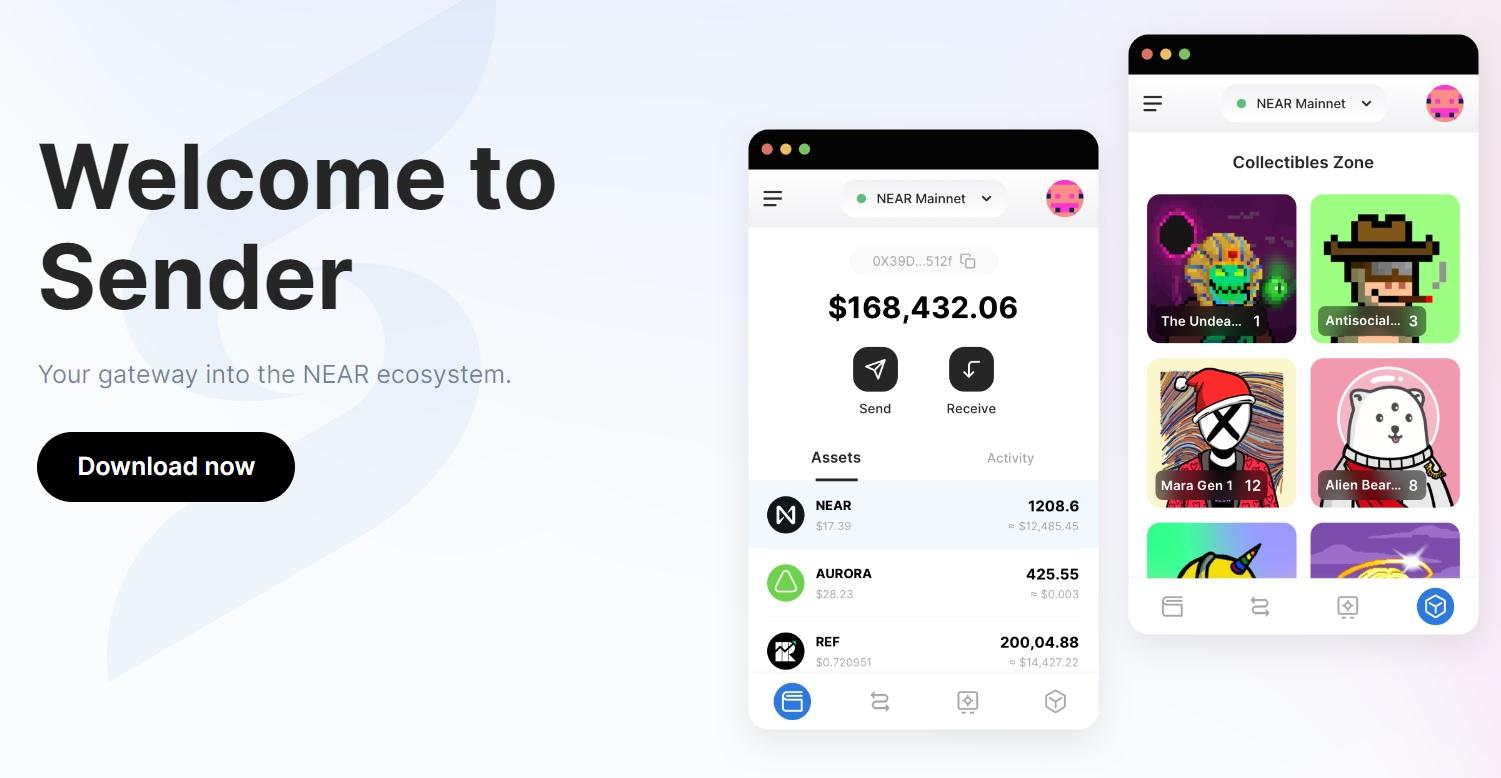 Binance offers the greatest Return On Investment (ROI) with rewards for staking ranging between 10.79% and 30.99% APY. Additionally, Binance provides investors with a great deal of staking flexibility with its staking pools. Moreover, it is a highly secure and reputable crypto exchange for token holders.

Yes, staking NEAR tokens can be profitable as the highest Annual Percentage Yields (APYs) can be above 30% at the time of writing. Although, the returns are dictated by market conditions, and investors should take into account the amount of time they’re comfortable committing. Under a bear market, the overall returns on investment for NEAR token holders can be much lower.

Like most other proof of stake coins, staking does involve some amount of risk. Risk of slashing, malicious attacks and restricted liquidity are a few risks that are most prominent. Using an official NEAR wallet to stake can help mitigate these risks to some extent.

Staking is a relatively recent way to make money with crypto, and with NEAR investors can earn rewards on their crypto investment. Additionally, users also participate in enabling the growth of the ecosystem, while benefiting themselves simultaneously. Investment decisions should be made by considering all the risks & tokens rewards associated with the currency. 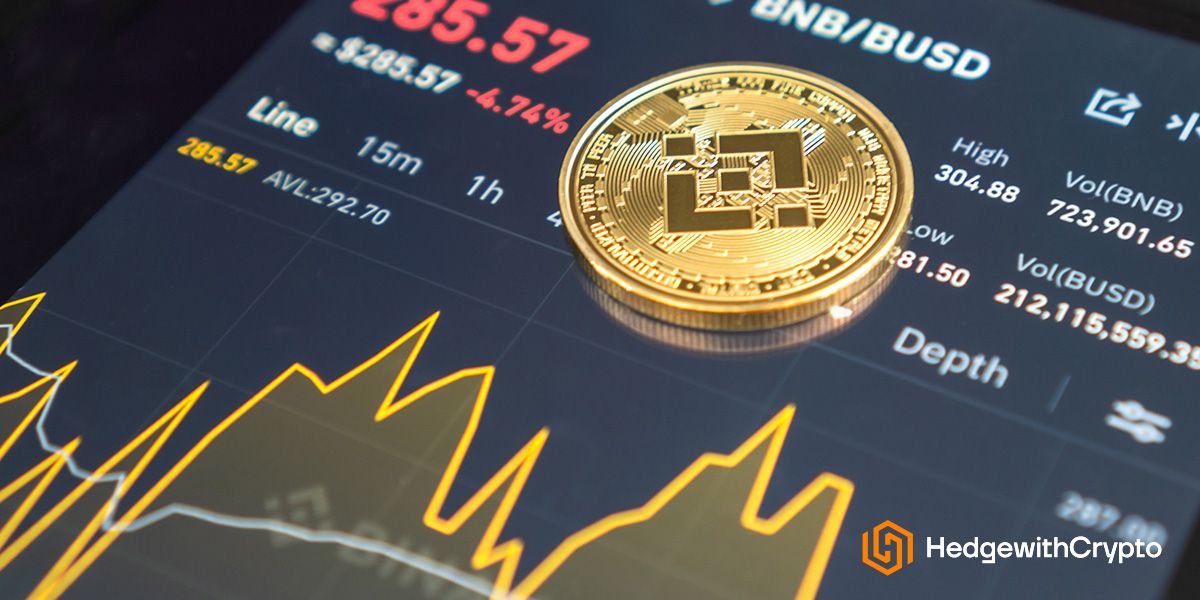 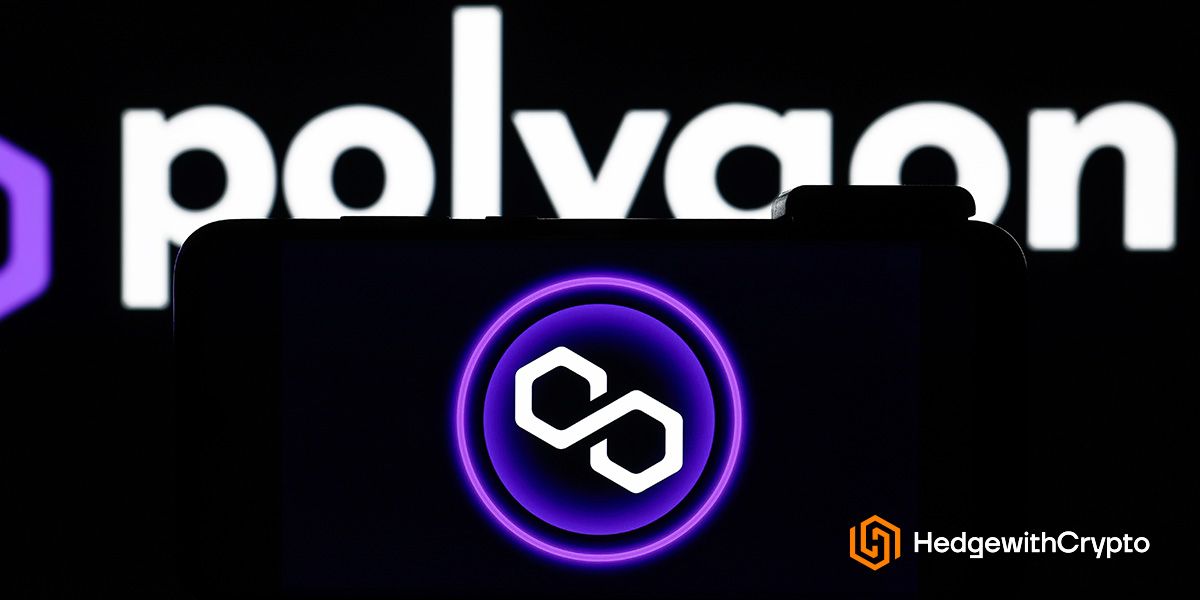 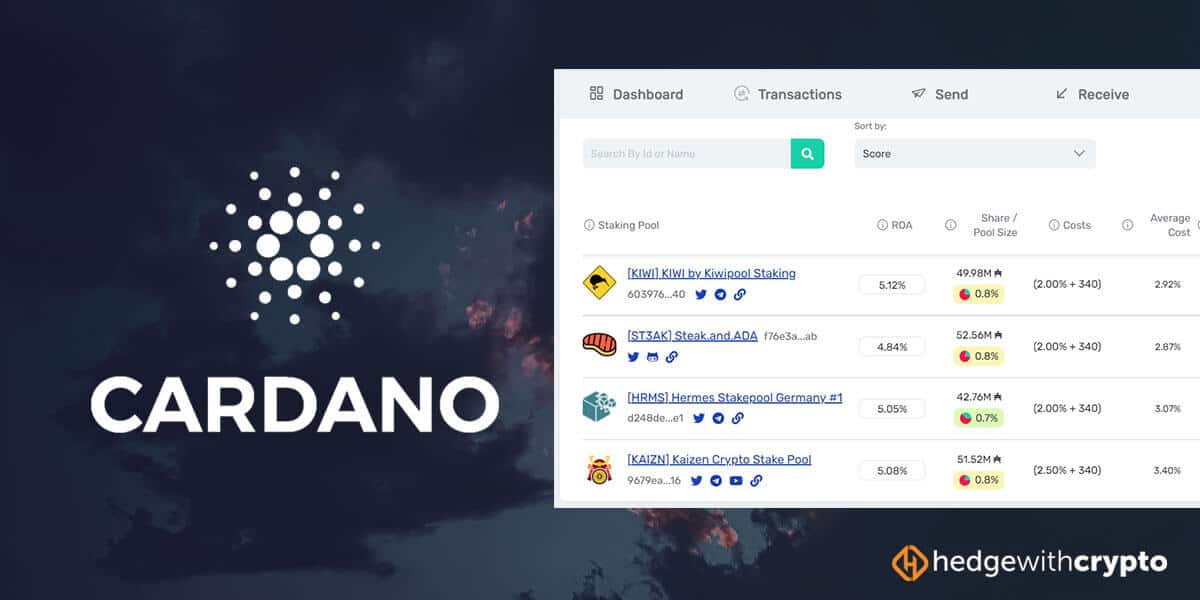 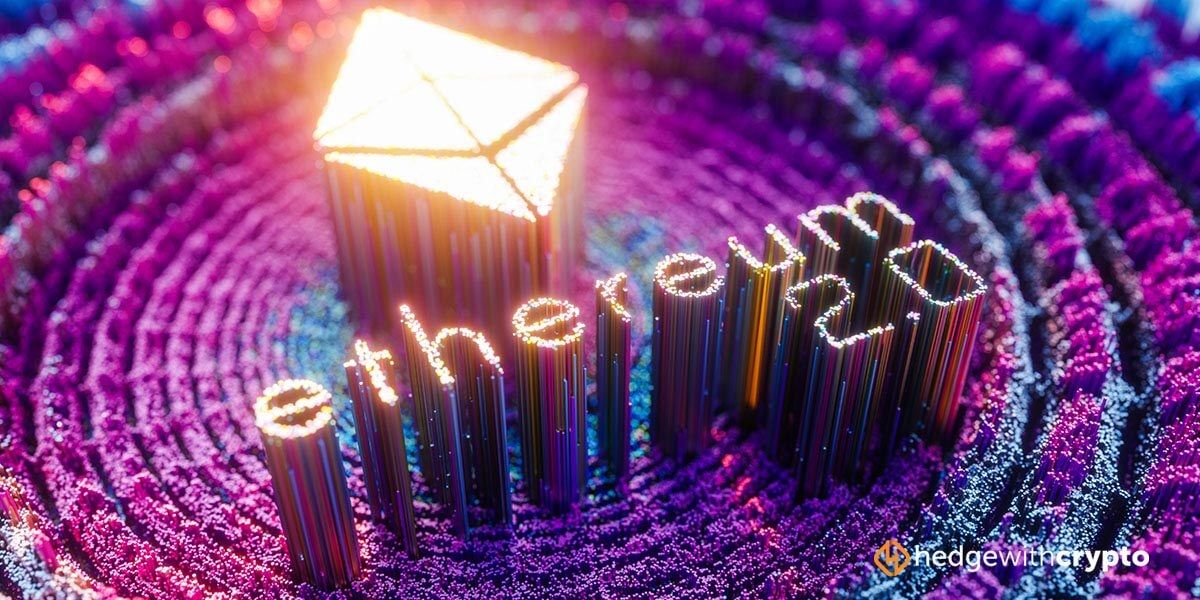 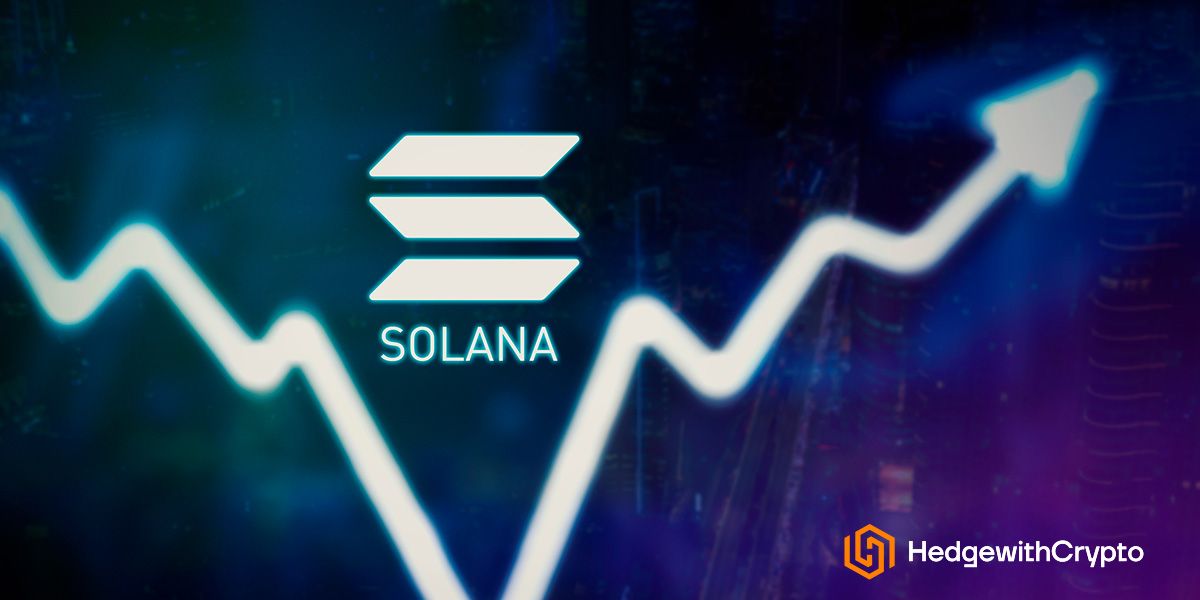