Table of Contents
What Is A Stablecoin?USDC vs. USDT: OverviewUSDT vs USDC: Origins & ManagementUSDT vs USDC: Risks & SecurityUSDC vs. USDT: Supported Wallets & ExchangesUSDC vs. USDT: Which Is Better For Staking?USDT vs. USDC: Which Offers Higher Interest Rates?Verdict: Which Should You Use?

The cryptocurrency markets are well-known for their sudden and wild price swings. This has led to speculators flocking to the market to gain exposure to the industry in the hope that they will be on the winning end of volatility. As a way to hedge against the volatility, stablecoins were introduced to the market which are tied to fiat currencies such as the US Dollar. This gives investors a familiar and reliable price point to investor and trade the asset class.

Stablecoins such as Tether (USDT) and USD Coin (USDC) are widely known and used on the most popular cryptocurrency exchanges, trading platforms and wallets as a stable "digital fiat currency". While Tether is the larger and more widely traded coin, questions surrounding its cash reserves and regulatory troubles have turned investors to USDC as it may be a safer stablecoin than USDT. This article will explore the history behind USDT and USDC, what the differences are between the two stablecoins and which is better to use for cryptocurrency trading.

What Is A Stablecoin?

Stablecoins are a group of cryptocurrencies that are worth the same as one United States dollar, within a minimal margin. There are other fiat currency stablecoins on the market, however, the USD-dominated coins are the most popular in terms of market capitalization. The objective of stablecoins is to provide a digital currency that has a stable and reliable price.

While there are subtle fluctuations in the price, stablecoins can be traded with minimal volatility using a familiar unit of account. Common use-cases for stablecoins include a store of value, trading between other cryptocurrencies and investment vehicles to earn interest on lending and borrowing platforms.

USD Coin, often referred to as USDC, is a United States dollar stablecoin created by Circle this is used for financial payments and trading. Circle is a global technology company that worked closely with cryptocurrency exchange Coinbase and Bitcoin mining firm Bitmain on the USDC project. USDC runs natively as an Ethereum ERC-20 token. There are also versions for the Algorand, Solana, Stellar, TRON, Hadera and Avalanche blockchains through the USDC smart contract.

As of this writing, there are 52.6 billion USDC in circulation, representing $52.6 billion in cryptocurrency. Circle states that USDC is fully backed by cash and cash equivalents, including U.S. Treasuries. USDC is audited by the public accounting firm Grant Thornton monthly, where they publish a report showing that the currency is fully backed by fiat currency and equivalent assets. According to CoinMarketCap, it is the fifth-largest cryptocurrency by market capitalization.

Tether is a popular stablecoin that is tied to a range of fiat currencies, including the United States dollar and physical gold. Newly minted USDT tokens are anchored to the US Dollar on a 1 to 1 basis and stored in the company's treasury. Tether is closely affiliated with Bitfinex which is a large cryptocurrency exchange. Tether coins are available on the Algorand, Ethereum, EOS, Liquid Network, Omni, Tron, Bitcoin Cash Standard Ledger Protocol, and Solana blockchains.

Tether was the first blockchain-enabled that used a stable form of accounting which was developed to solve the inherent problem of volatility in the cryptocurrency market and to facilitate blockchain-based transactions using a familiar unit of account. Since Tether was introduced to the market, it has become the most widely used stablecoin with a current market capitalization of $78.7 billion, which equates to the 3rd largest cryptocurrency in the world. 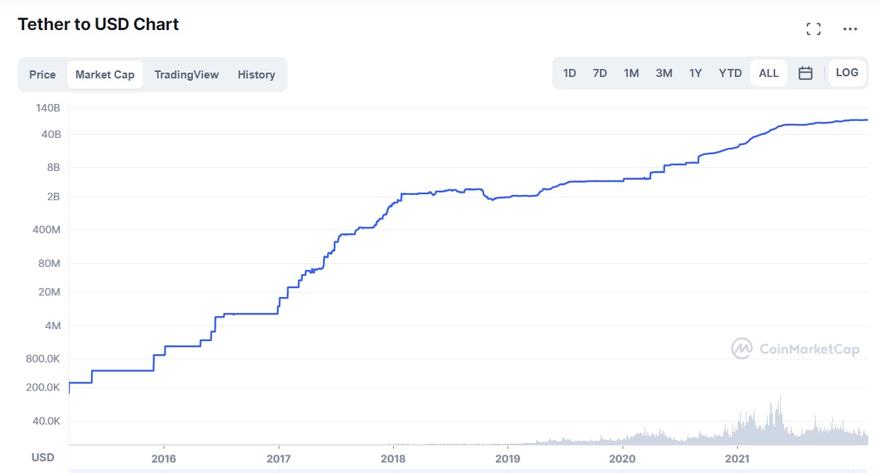 Tether issues new currency when it receives fiat equivalents and has one-to-one backing for each Tether issued. Accounting firm Moore releases regular reports confirming a mix of cash and equivalents, bonds, funds, precious metals, secured loans to non-affiliated entities, and other investments. However, according to the New York State Attorney General, Bitfinex and Tether have hidden losses and comingled funds inappropriately and were fined.

USDC and USDT both aim to give cryptocurrency investors and traders a stable currency that’s worth one dollar instead of the high volatility of traditional cryptos like Bitcoin and Ethereum. USD Coin was announced in May 2018 and launched in September of the same year. Tether was one of the earliest stablecoins, introduced in 2012 and launched in July 2014.

Tether is an independent company but maintains close ties to Bitfinex. That is part of what has driven the recent controversy with the same person is the CTO of both Bitfinex and Tether. Circle is also an independent company, though it maintains a close relationship with Coinbase. Coinbase goes as so far as to call it a “stablecoin by Coinbase.” However, it doesn’t have the same history of legal troubles and questions regarding its cash and asset reserves.

Stablecoins such as USDC and USDT are similar in that they are pegged 1:1 with fiat currency with reserves in cash and assets. Tether has had a history of questionable activity that has introduced risk in the market. In August 2021, Tether was quoted as stating that “Tether has always been fully backed.” However, in the same month, the New York State Attorney General Latisha James said, “Tether’s claims that its virtual currency was fully backed by U.S. dollars at all times was a lie.” In the end, Tether paid an $18 million fine and agreed not to conduct business in New York (didn’t admit any wrongdoing).

Tether has since released reports “proving” that it is fully backed but these incidents lead to questions on the stability and security of USDT. In contrast, USD Coin has not had any issues with providing transparency on its reserves to prove it holds sufficient assets to maintain the backing of the stablecoin. Therefore, USD Coin may be a better option for risk-averse investors as it does not have a history of legal complaints with regulators.

USDT and USDC are widely supported stablecoins on centralized and decentralized exchanges and wallets. The biggest exchanges for USDT are Binance, Huobi Global, KuCoin and FTX. Binance is by far the largest exchange for USDT in terms of trading pair volume, with top markets including BTC/USDT, ETH/USDT, LUNA/USDT and BUSD/USDT at the time of writing. 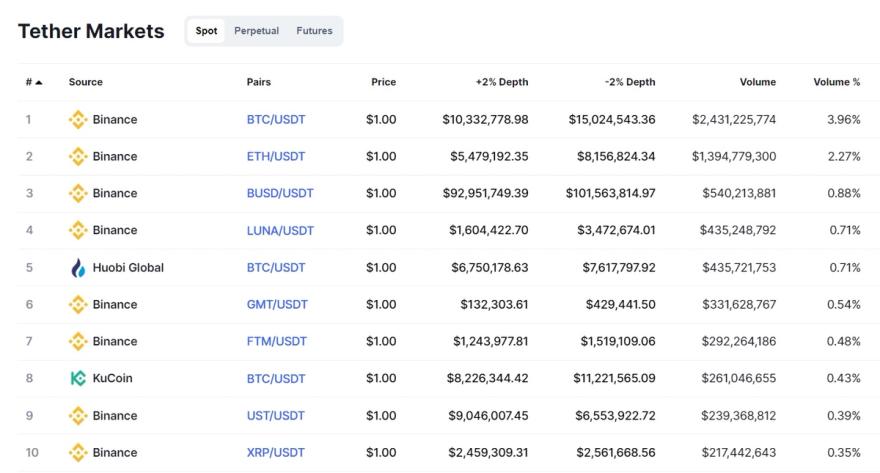 With regards to wallets, both USDC and USDT are heavily supported stablecoins and are compatible with a range of hardware, software and mobile wallets. Examples of compatible hardware and software wallets include Ledger, Trezor, MetaMask, Trust Wallet and the Coinbase Wallet.

USDC vs. USDT: Which Is Better For Staking?

Staking cryptocurrency offers investors the option to earn a passive income. USDC and USDT can be staked on supported exchanges and wallets to validate transactions and contribute to the overall security of the network. Users that delegate their coins are given a percentage-based taking reward based on the number of tokens locked in. Staking USDT and USDC can offer high staking returns of up to 8.5% depending on the platform.

At the time of writing, USDC is the biggest stablecoin for staking with a total staked volume of 6.6 billion compared to 2 billion for USDT. However, the estimated average return for staking USDT is higher at 8.26% versus 7.11%. In short, Tether offers a better staking return compared to USD Coin based on the blockchain network data at the time of writing. To learn how to stake crypto such as stablecoins to earn rewards, read this article next.

Lending and borrowing platforms are a vital component of the cryptocurrency industry with more investors choosing to loan their assets including stablecoins to earn a higher return than a traditional bank. Some of the best places to earn interest on USDT and earn interest on USDC with rates up to 10% APY on both tokens. There are higher rates available depending on the chosen platform, however, the rates for USDT and USDC are equal on most platforms. Overall, both USDC and USDT offer similar interest rates with the option for daily compounding. The choice on which stablecoin is better depends on the individual's preference and other reasons for holding the coin.

Verdict: Which Should You Use?

USDC and USDT are very similar in terms of how they operate, valued at $1 each and have equal opportunities for earning rewards through staking and lending platforms. While Tether is the more popular stablecoin in terms of trading activity, USD Coin appears to be the safer choice compared to USDT which has been fined by the Commodity Futures Trading Commission (CFTC) for misconduct.

6 Best Crypto Staking Platforms For 2022One-click staking on cryptocurrency trading platforms and exchanges have surged in popularity. We will review and compare the best staking platforms based on supported assets, staking fees and other factors.

Best Crypto Lending Platforms: 2022 Reviews & ComparisonsLooking for a crypto lending platform to borrow or earn yield? This article will review and compare the top crypto lending websites in the market.

6 Best Crypto Staking Platforms For 2022One-click staking on cryptocurrency trading platforms and exchanges have surged in popularity. We will review and compare the best staking platforms based on supported assets, staking fees and other factors.

Best Crypto Lending Platforms: 2022 Reviews & ComparisonsLooking for a crypto lending platform to borrow or earn yield? This article will review and compare the top crypto lending websites in the market.