The cryptocurrency market is often touted for its volatility and extreme price swings. A group of cryptocurrencies that are stable in price and not susceptible to fluctuations in price is 'stablecoins'. This article will delve into what Tether (USDT) is, how it works, why it differs from other cryptocurrencies, its pros and cons and whether it is a good investment.

Tether (USDT) is a blockchain cryptocurrency that is pegged to the United States Dollar on a 1 to 1 basis and backed by reserves. The number of tokens in circulation is backed by an equivalent amount of US Dollars held in a bank account which pegs the value of 1 Tether to the equivalent of USD 1. That is, 1 USD₮ = 1 USD which is 100% backed by Tether’s reserves which can be verified daily.

Tether was developed to solve the inherent problem of volatility in the cryptocurrency market and to facilitate blockchain-based transactions using a stable and familiar unit of account. The supported real-world currencies include the US Dollars (USD), Euros (EUR) and the offshore Chinese Yuan (CNH). Since its inception to the market, Tether has become the most widely used stablecoin with a current market capitalization of $73 Billion.

Related: What are stablecoins, how do they work & are they safe?

Founded in July 2014 by Brock Pierce, Craig Sellars, and Reeve Collins, Tether was the first blockchain-enabled platform to use a stable accounting unit based on the US Dollar. Cryptocurrency exchange Bitfinex initially developed Tether as a stablecoin as a way to incentivize peer-to-peer transactions without exposing users to additional volatility risks.

What Is Tether Used For?

The price stability and familiar unit of account enabled Tether to be widely used in the blockchain industry in various products and services. The most common applications for USDT include facilitating peer-to-peer transactions and trading between cryptocurrencies, cross-border payments and as collateral in decentralized lending and borrowing products.

Before Tether was introduced, cryptocurrencies were mostly paired against Bitcoin, which presented two primary risks:

The solve this problem, USDT was integrated as a reliable token pairing standard across the leading crypto exchanges and substituted the BTC standard in 2017. USDT pairings became widely accepted by the industry due to a familiar real-world fiat pairing to crypto. As a result, Tether is the most popular digital currency for trading between cryptocurrencies with the most pairings compared to other stablecoins.

How Does Tether Stay at USD 1?

A common question that is asked is how the value of Tether remains fixed to the equivalent of USD 1. Each newly minted USDT token is anchored to the US Dollar on a 1-to-1 basis and stored in the company's treasury. There are often small price discrepancies with the price of USDT with the price dropping below and above $1 occasionally. Larger fluctuations greater than 0.01 cent are extremely rare and have occurred in 2021. 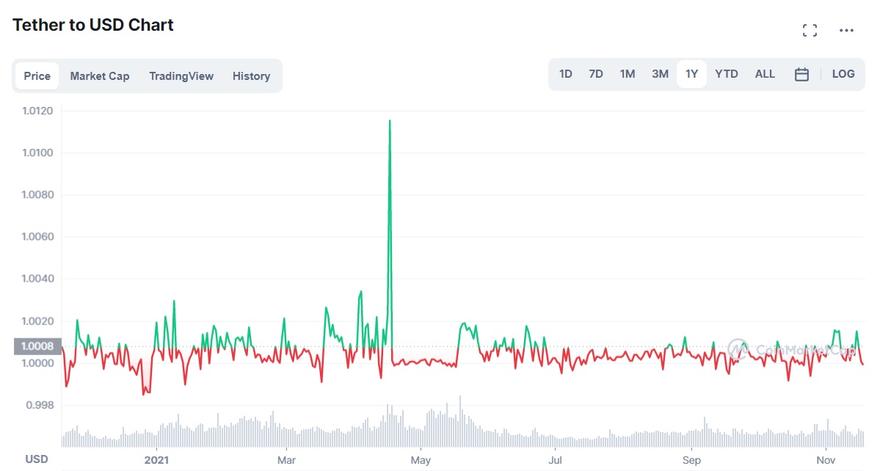 Tether has a governing body that takes decisions on financial and issuance matters. The Treasury owns several assets other than USD to diversify its exposure to multiple financial instruments. If Tether were to be liquidated, the company could sell most of its treasury assets and still maintain the 1:1 peg according to Tether's bank balances and the value of its reserves.

Is Tether A Good Investment?

Tether is a good investment as it offers better access to cryptocurrency assets and minimizes investment risks by detaching itself from price volatility. USDT decreases friction when swapping cryptocurrencies and increases transaction speeds compared to using traditional currency. In addition, Tether is useful for cross-border payments as it does not require crypto to fiat conversions and bypasses governmental authorities and banks.

Unlike cryptocurrencies, which can increase in value over time, Tether does not appreciate due to the 1 to 1 peg with the US Dollar. Therefore, selling Tether to make a capital gain is not possible. Alternatively, investors can invest using cryptocurrency platforms to earn interest on USDT by lending their tokens. Investors can earn attractive interest rates to store USDT on their platform to earn up to 12% APY.

Tether is a safe and secure cryptocurrency that is built using blockchain technology that features leading cryptographic security protocols that are open-source and 100% verifiable on the public network. All USDT tokens in circulation are pegged on 1 to 1 basis with the US Dollar which can be verified at any time by examining the daily records of its bank balances and reserves that are published daily.

A risk that is present with Tether is due to the centralized nature of the company, Tether Limited. Unlike decentralized cryptocurrencies such as Bitcoin, the company is in control of the issuance of new USDT tokens. While the company cannot withdraw tokens, there is a risk the tokens will become worthless or redundant if the company goes bankrupt.

Furthermore, economic factors such as a decline in the global economy or USA's GDP could have unwanted effects on the value and stability of the USD. This could influence the company's stability and consequently the value of USDT. In short, both USD and USDT will lose much of its purchasing power under these circumstances.

Based on our analysis, there are two possible causes as to how Tether could crash. Firstly, Tether Limited which issues and governs USDT tokens could become insolvent or bankrupt. Secondly, a loss of confidence causes investors to switch to an alternative stablecoin for transactions making Tether a redundant cryptocurrency.

As Tether is a centralized cryptocurrency, its survival is hinged on the company that issues and governs new USDT tokens. In the event Tether Limited is forced to liquidate its assets and reserves, the consequences would have a catastrophic ripple effect through the crypto market.

Why Is Tether Controversial?

Tether and Bitfinex have made the spotlight for all the wrong reasons. There have been concerns over price manipulation and whether the amount of cash reserves in Tether's Treasury is enough to justify the 1 to 1 peg with the US Dollar.

Tether was the subject of an investigation regarding price manipulation in 2017 and 2018. An official report found no publicly auditable records show any new token issuance as of August 2018. In 2021, the US Attorney General reached a settlement with Tether and Bitfinex to pay $42.5 million; however, Tether Limited and Bitfinex did not admit the allegations despite paying the fine. For these reasons, investors have turned to alternative stablecoins to Tether such as USD Coin and Binance USD. For more information, read our comparison on USDT vs USDC which outlines their differences and which is safer for investing.

In 2021, following concerns about Tether's unwarranted exposure, Tether showed that the company had only 2.7% of their entire treasury in cash. The rest of the holdings were in commercial papers which are a form of short-term debt. Furthermore, there are reports Tether had exposure to Evergrande Chinese commercial papers despite the company stating otherwise.

Tether is beneficial to the industry as it increases the accessibility for anyone to get involved and use digital currencies. The stablecoin acts like a glue that brings together fintech business', wallets, payment processes, financial services and ATM's together onto the blockchain.

Tether's market dominance as the most widely used stablecoin and 4th largest cryptocurrency is also its Achilles heal. As a centralized project, a major incident involving Tether Limited would have catastrophic impact on the whole crypto industry.

Tether is the largest and most widely used stablecoin that is available to purchase on most cryptocurrency exchanges. The best way to obtain USDT is to use a fiat to crypto exchange that can convert traditional money into digital currencies. Popular trading platforms that allow USDT to be purchased with multiple fiat currencies and using a variety of payment method include Coinbase, Binance, FTX, Kraken, Gemini and eToro.

Tether Limited is registered in the British Virgin Islands and is not regulated in any country including the United States. However, USDT is a cryptocurrency that does not belong to any financial system. Therefore, the laws governing cryptocurrencies apply to Tether which can be bought, traded and sold using a crypto exchange in the US.

Tether is the 4th biggest cryptocurrency by market capitalization with demand growing at an accelerated pace as more users enter the crypto industry. While the company behind Tether still poses concerns about its cash reserves and price manipulation in the market, the currency solves the inherent problem of volatility in the crypto market and facilitates crypto-to-crypto transactions using a familiar unit of account.

8 Best Crypto Margin Platforms For 2022Find out the best platforms for leverage trading crypto. We have rated each exchange on its features, margin amount, trading pairs and security.

8 Best Crypto Margin Platforms For 2022Find out the best platforms for leverage trading crypto. We have rated each exchange on its features, margin amount, trading pairs and security.