Bitcoin continues to be the most widely held cryptocurrency among investors. Its peer-to-peer decentralized payment network allows anyone to become the custodian of their own wealth. Unfortunately, self-custody also comes with downsides. According to data collected by on-chain intelligence provider, Glassnode, in 2022 over 13% of the current circulating supply of bitcoins may have been lost forever.

This article will explain when Bitcoin is classified as ‘lost’, how much Bitcoin is lost, why are so many bitcoins lost forever, and what you can do to prevent bitcoins from becoming lost in the future.

How Much Bitcoin Has Been Lost?

Using data captured by on-chain intelligence provider, Glassnode, in November 2022, it is estimated that 2,550,615 bitcoins may be lost forever. This estimate accounts for all Bitcoins in one wallet address that has not moved in more than 10 years. Therefore, it is assumed to be more likely that the majority of the Bitcoins in this estimate have been permanently lost. 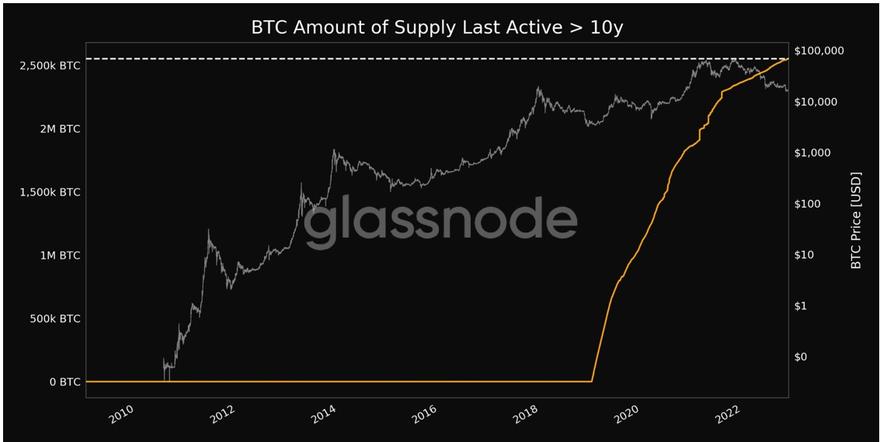 Chart of Bitcoin that has been inactive for more than 10 years. Source: Glassnode.com

By comparing Glassnode’s estimate with the circulating supply of bitcoin in Nov 2022, which is 19,214,975, lost bitcoin could account for 13.2%. With a bitcoin price of $16,000, this equates to a dollar value of $40.8 billion worth of lost Bitcoin. Other data analytics providers, such as Chainalysis, have provided different estimates in the past. By using an inactivity time period of 5 years, in June 2020, Chainalysis reported that the number of lost Bitcoins likely sat between 2.78 and 3.79 million. A figure which accounted for nearly 20% of Bitcoins circulating supply.

Related: How many Bitcoins are there left to mine?

It is estimated that Satoshi Nakamoto, the pseudonymous creator of Bitcoin, mined approximately 1 million Bitcoins. After disappearing in 2011, the mined bitcoins have not moved in over 10 years and are considered permanently lost by many analytics companies when estimating the number of lost Bitcoin. According to notes from discussions with Satoshi Nakamoto, it is believed that these coins may have been left as an acknowledgment of the private self-custody Bitcoin was built for.

As the identity of Satoshi Nakamoto remains a mystery it is still unclear if these bitcoins will ever become accessible.

When Is A Bitcoin Lost?

Cryptocurrencies, including Bitcoin, are stored in cryptocurrency wallets. However, the language used to describe cryptocurrency storage is slightly misleading. Instead of storing Bitcoin, the wallets store the private keys to rightfully access the asset. It is the Bitcoin private keys that provide authorization to move crypto from the wallet. Therefore, Bitcoin is considered lost if access to a bitcoin private key is lost. If a user can no longer access the private key for a particular wallet, and there is no backup, bitcoins become irretrievable.

Unfortunately, the number of inaccessible wallets and, therefore, missing private keys, is difficult to track. There is no definite way to determine if a private key has been lost or whether the owner is simply HODLing Bitcoin for the future.

To gain an appreciation of how many bitcoins may be lost, data analytics companies use an assumption. that Bitcoins are lost if the coins have remained stationary for a set number of years. While the number of years sitting dormant is subjective, therefore, making the estimate flawed, it is the only way of providing some insight into the number of bitcoins that may never enter circulation again.

How Is Bitcoin Lost?

Human error is the primary reason why bitcoins are lost. Bitcoin was designed as a peer-to-peer payment network that places control back into the hands of individuals. However, this level of control comes with accountability. If there is a lack of understanding regarding private keys, seed phrases, crypto wallets, and how the three relate to the Bitcoin blockchain, bitcoins can easily be lost.

Here are the key reasons why bitcoins become lost:

How To Make Sure You Don’t Lose Your Bitcoin

Bitcoin is an incredible tool that lets anyone become their own bank. As long as the risk of losing bitcoins is mitigated, unlocking the advantages of the Bitcoin blockchain is straightforward. Education is key to ensuring lost bitcoins are a thing of the past.

Yes, according to the latest figures, more than 13% of the current circulating supply has been lost forever due. Bitcoin can be lost for several reasons such as the owner losses the private keys, makes an incorrect transaction, misplaces the recovery phrases to the Bitcoin wallet, or does not have an inheritance plan.

Based on current figures, between 10 and 20% of bitcoins may be lost forever. Through a combination of lost hardware wallets, forgotten passwords, and incorrect transactions, Bitcoin private keys become inaccessible resulting in the Bitcoin becoming lost forever. However, this misfortune can be overcome by staying educated and following best practice security steps. Remember to store bitcoins within a leading Bitcoin hardware wallet, back up all recovery seed phrases, and always triple-check wallet addresses.