There are a lot of positive arguments for owning Bitcoin. In comparison to other methods of transferring wealth, Bitcoin is borderless, permissionless, requires no storage and is far cheaper to transfer. The digital coin is now also commonly viewed as a store of value and a hedge against rising inflation. Storing the world’s leading cryptocurrency is not always that straightforward.

Even those that do not regularly interact with the cryptocurrency industry have heard stories of large amounts of Bitcoin being lost or stolen. This article will explain how Bitcoin can be lost or stolen, steps to prevent it and the most common methods to recover lost or stolen Bitcoins.

The Challenges of Storing Bitcoin

While Bitcoin may have created hundreds of millionaires since it was first launched in 2009, there are also several examples of early adopters unknowingly throwing away future riches. According to a Chainalysis report released in 2020, of the 18.6 million Bitcoin that had been mined at the time, 20% were considered to be lost. Lost Bitcoins were defined as those that had not moved from current addresses for 5 years or more. While some of these will be held by long-term holders, it is assumed that a large percentage will be composed of investors that have simply lost access to their Bitcoin private keys.

Infographic shared by Chainalysis that estimates how the total 21 million BTC are distributed between BTC held for long-term investment, BTC that is lost, BTC held for trading, and those that still need to be mined. Data accurate as of 2020. Source: Chainalysis.com

While the underlining blockchain technology behind Bitcoin is difficult to hack, the high security of the network has its downsides for owners. If private keys are lost, Bitcoin cannot be accessed. If Bitcoin is sent to the wrong wallet address, the transaction cannot be reversed. But in these scenarios, does that mean Bitcoin funds are lost forever? Perhaps not, as we explain below.

Can You Retrieve Lost or Stolen Bitcoin?

While retrieving Bitcoin is extremely difficult, it is not 100% impossible to recover and will depend on a range of different factors. The first factor that will determine how Bitcoin funds are found is whether the Bitcoin was lost or stolen to determine how to track down the funds. If the private keys to the wallet has been permanently lost, the chances of recovering the funds are virtually zero. If the Bitcoin was lost due to a crypto exchange shutting down as a result of legal reasons or bankruptcy, there is a possibility of recovering funds but it can be a lengthy process.

How To Recover Lost Bitcoin

Losing Bitcoin usually involves an investor losing access to a seed phrase, private key or password. An owner may know which wallet address Bitcoin is stored within, and may even be able to trace the Bitcoin using a blockchain explorer to find the Bitcoin transaction ID. However, access will likely be impossible if the seed phrase has been forgotten or deleted to recover the wallet. If a Bitcoin wallet cannot be accessed, there are two options to consider to attempt to retrieve the lost Bitcoins. These include engaging a professional crypto hunting service and extracting data from the hard drive with the lost private key.

How To Recover Stolen Bitcoin?

Bitcoins that are stolen due to a compromised seed phrase, fraudulent activity of unauthorized access to a custodial wallet or cryptocurrency exchange can be recovered. The most popular method to attempt to recover stolen Bitcoin are to track the money and inform crypto exchanges to freeze the account and hire a professional bounty hunter.

Why Is It So Difficult To Retrieve Lost of Stolen Bitcoin?

Bitcoin was developed as a decentralized blockchain that comprises individual and groups miners that process, validate and verify transactions. As such, there is no central entity that can be contacted if Bitcoin is lost or stolen.

All cryptocurrencies are controlled by a set of private keys that are similar to a password. This unique string of characters gives the holder the power to transfer, buy or sell the associated digital asset. Investors must be accountable for storing Bitcoin and securing these private keys. If the Bitcoin private key is lost or stolen, an investor’s funds can often be lost forever. The level of accountability and unforgiving nature of holding Bitcoin is one of the key reasons that individuals and institutions globally have been slow to adopt.

Moreover, unlike holding fiat currency in a bank, Bitcoin is not covered by government-backed insurance policies that customers are used to in the traditional finance industry. Organizations such as the Federal Deposit Insurance Corporation (FDIC) in the US, the Financial Conduct Authority (FCA) in the UK, or the Financial Claims Scheme (FCS) in Australia, do not offer levels of protection against cryptocurrency assets. It is only recently that organizations such as these are beginning to offer some insurance cover for centralized cryptocurrency service providers, but the majority are still not covered. As a result, using and holding Bitcoin requires a level of accountability.

Bitcoin owners that lose or forget a seed phrase run the risk of potentially losing Bitcoin forever. Every cryptocurrency wallet generates a public and private key which can be recovered using a unique seed phrase. If the seed phrase is lost, access to the wallet cannot be granted. For most Bitcoin wallets, private keys are composed of a 12 or 24-word seed phrase that must be entered in a specific order. The seed phrase is the key to unlocking a wallet and the Bitcoin stored inside.

Many newer investors are not aware that when using a non-custodial wallet (a wallet that only they control), if they delete or forget a seed phrase, the stored Bitcoin will become inaccessible. A hard copy of a seed phrase should be written down and safely stored just in case a cryptocurrency wallet ever needs to be recovered. 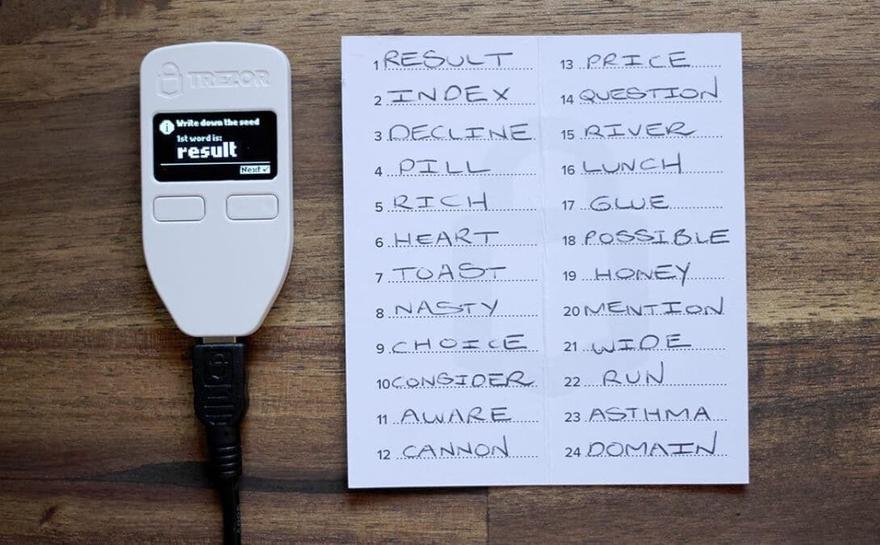 Trezor Bitcoin wallet seed phrase to recover funds if the wallet is lost or stolen.

Sent Bitcoin To The Incorrect Address

Bitcoin wallet addresses used to send transactions between other wallets are known as public keys. These comprise of a long string of numbers and letters for security, however, the public address can easily be typed incorrectly and sent to the wrong Bitcoin wallet.

Although there is a level of accountability that comes with storing Bitcoin within a non-custodial wallet and, therefore, personally securing a seed phrase, these types of wallets are still viewed as the most secure option.

By storing Bitcoin on an exchange, an investor is entrusting that the exchange will protect and will not utilize those Bitcoin funds inappropriately. Unfortunately, there have been multiple instances where exchanges have either disappeared with users’ funds or have been hacked and lost funds.

According to our research, more than 2.66 billion has been stolen from cryptocurrency exchanges since 2012. Although security is improving constantly, and some platforms even offer insurance policies, these historic statistics highlight the ongoing need to store Bitcoin funds securely.

How To Prevent Bitcoin From Being Lost Or Stolen

After more than a decade of tackling lost and stolen Bitcoin, fortunately, there is now a concise set of rules to follow to protect Bitcoin against scams and hackers.

There are still risks associated with storing the world’s leading cryptocurrency. For all of the advantages that Bitcoin offers, coins can still be stolen and coins can still be lost. Fortunately, there are several steps that investors can take to prevent the loss of funds and if the worst happens, there are a few ways to potentially recover funds if they become inaccessible.

Data recovery software or crypto hunting services can be employed to find lost Bitcoin funds. Alternatively, tracking Bitcoin transactions or hiring a crypto bounty hunter can provide answers for those that have had funds stolen. While the possibility of recovery remains small there are now several methods that can be investigated to help users find missing Bitcoin.