Home
Bitcoin
How Many Bitcoins Are There & Left To Mine? 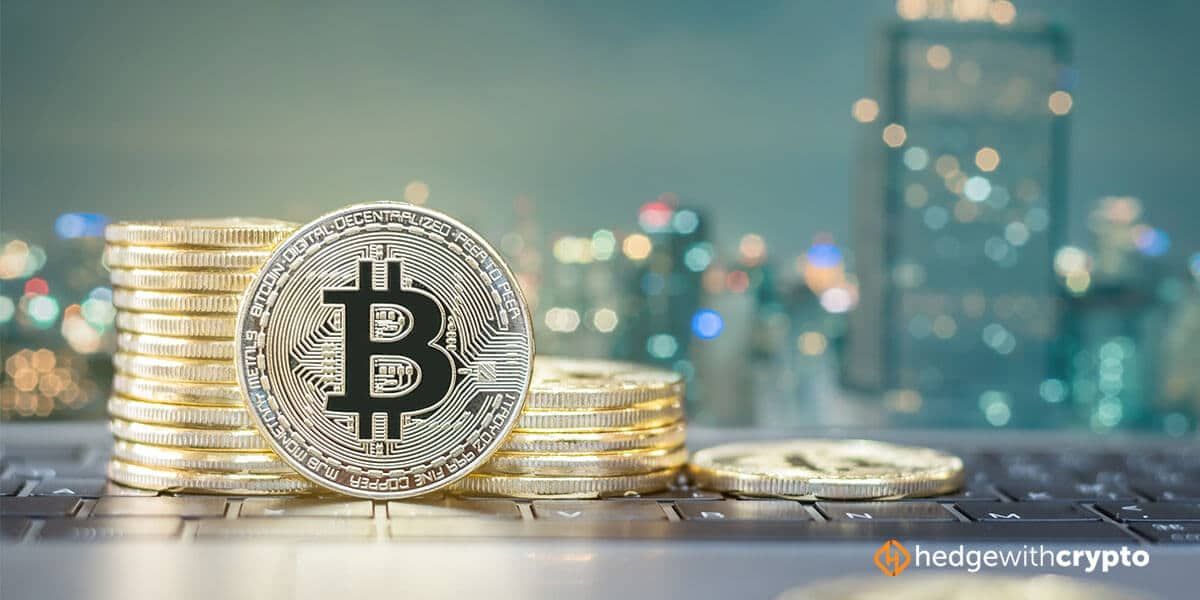 Developed and released by Satoshi Nakamoto in 2008, Bitcoin (BTC) has a limited supply of 21 million coins. The finite supply formed an industry allegory to digital gold as investors continue to speculate on the asset as a store of value. Moreover, some industry experts have suggested Bitcoin price prediction of more than $100,000 by the end of 2022.

After Bitcoin reached its all-time high of $64,000 in 2021 with over 2.2 million BTC tokens left to mine, the last Bitcoin will be created in the next century. In this article, we explain how Bitcoins are made, how many are left and what happens when the last Bitcoin is mined.

How Is Bitcoin Created?

A Bitcoin is created through a digital and decentralized process that is commonly referred to as 'mining'. Individuals that participate in mining Bitcoin are granted a "block reward" every 10 minutes which contains a string of network transactions that need to be validated. The miners are rewarded with new Bitcoins for their services to process transactions on the blockchain.

ASIC miners which are heavy energy-dependent machines are used to mine Bitcoin. Mining Bitcoin was possible using consumer-grade video cards; however, as computation demand increased, video cards could no longer meet the network demands. Even with the development of ASIC miners, individuals are joining a pool of multiple Bitcoin miners to increase the likelihood of finding a block reward. For more information, read our guide on Bitcoin mining pools and how they work.

How Many Bitcoins Have Been Created?

An estimated 18.79 million bitcoins have been created over the past 13 years and in circulation which equates to roughly 89% of the total fixed supply of 21 million coins. As the blockchain adjusts its difficulty in rapport to the number of miners, Bitcoin implemented a protocol that halves Bitcoin's block rewards every four years to extend miner incentives. 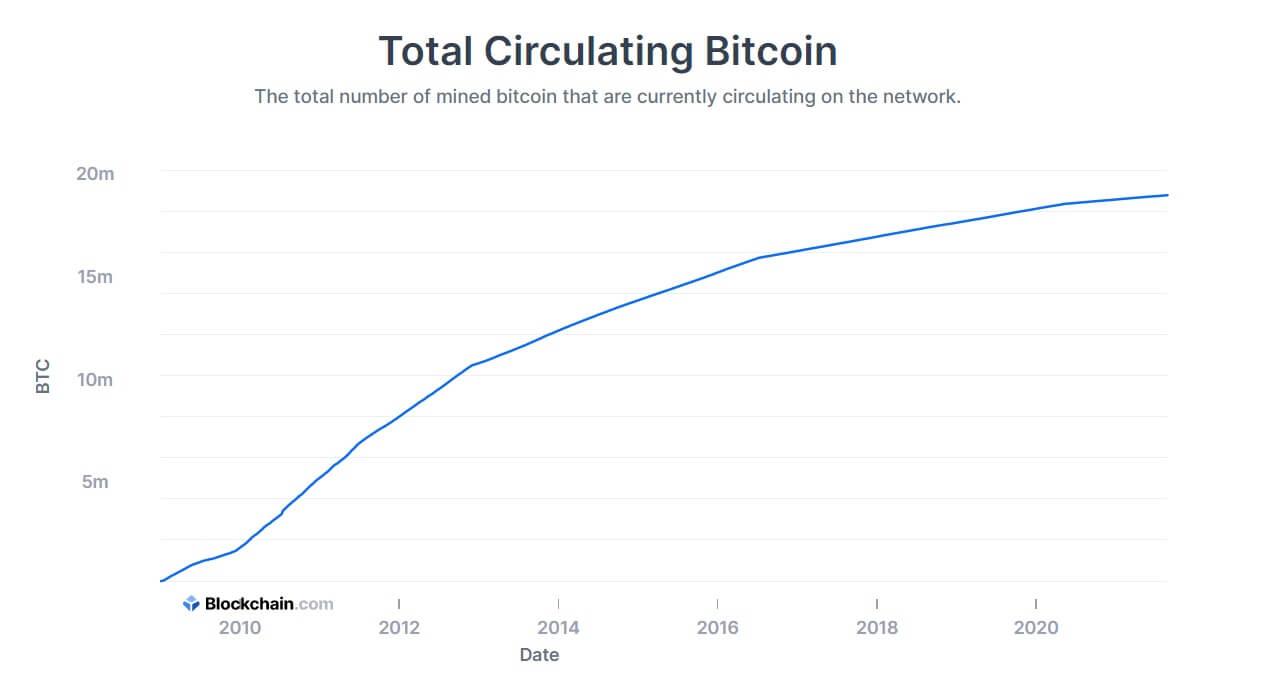 How Many Bitcoins Are Mined Daily?

Bitcoin rewards are received by the miners every 10 minutes when a block is discovered. Based on an average processing time of 10 minutes to validate and transfer a Bitcoin transaction, then 144 blocks are mined every 24 hours. With the current block reward of 6.25 BTC found in each block, the total bitcoins mined can be calculated to be approximately 900 BTC per day.

However, the exact number changes as network difficulty fluctuate with miners adding additional hashing power, which is measured using a term called hashrate. Thus, while the code requires each block to need 10 minutes to mine, every "discovery" process differs, and blocks have been found closer to 9.4 minutes. In the past 24 hours, 153 blocks were mined, concluding to a total of 956.25 BTC.

How Many Bitcoins Are Left To Be Mined?

89% of the total fixed supply of Bitcoin has been created in the last 12 years which leaves approximately 2.2 million Bitcoin are left to be mined. Miners are incentivized to continue participating in the network despite the block rewards halving every 4 years as the valuation of Bitcoin continues to increase.

When Will The Last Bitcoin Be Mined?

Taking into account variables like halving, block rewards, and supplementary hashing power, the last block is expected to be mined in 2140. The primary reason why the last Bitcoin will be mined in the next century is due to the fixed block reward every 10 minutes. The number of Bitcoins created every 10 minutes will reduce by 50% on each havening which occurs every 4 years.

While there is no central authority that controls Bitcoin and the protocol is self-sovereign, developers can vote to improve the network that may change the last BTC mining date. Until then, current calculations show the last BTC will be mined in the year 2140.

What Will Happen When The Last Bitcoin Is Mined?

A Bitcoin miner currently receives a block reward incentive for processing and validating transaction on the blockchain network. This reward helps to pay for the miner's equipment and energy consumption. Once the last Bitcoin block is mined in the year 2140, miners will be paid with transaction fees for their services to process and validate BTC transactions.

At the current price of Bitcoin, the transaction fees are worth a few hundred dollars per block. However, should the adoption of users and the price valuation of Bitcoin continue to rise, the transaction fees per block will also increase and provide a financial incentive for individuals to participate in the security of the Bitcoin network by validating transactions. However, there is a possibility that developers may vote on a change to the Bitcoin network protocol between now and then.

How Many Bitcoins Have Been Lost?

According to a study by the research firm Chainalysis, they estimate that around 3.75 million Bitcoins have been stolen or stuck in wallets are lost forever. These figures equate to roughly 20% of the 18.79 million Bitcoins that have been mined and in circulation. Based on current prices, the market value of the lost Bitcoins is approximately USD 172 Billion.

A major reason for the number of Bitcoins that cannot be recovered is due to human error. By design, the network uses a sophisticated form of cryptography to allow access to the rightful owner of the Bitcoin. The Bitcoin private key is an important component of how Bitcoin and other cryptocurrency coins works, which contributes to the security of the asset against theft, fraud and unauthorized access to funds.

Even though the last Bitcoin will be created in the year 2140, there is unlikely to be any impact on the security of the network. Investors will continue to buy Bitcoin and miners will still be incentivized with transaction fees to process and validate transactions on the blockchain.

It is expected the network usage of Bitcoin will continue its growth with huge demand from investors on popular cryptocurrency exchanges. Investors should not be too concerned with how many Bitcoins are left and look ahead to its evolution, development and impact on lives as a store of wealth.