It can be useful to understand what Bitcoin mining is, how it works and why Bitcoin mining pools are required in the first place. Mining Bitcoin refers to a process that involves miners validating transactions and securing the blockchain network. To achieve this, Bitcoin miners compete to solve a mathematical formula. The miner that manages to solve the formula first and, therefore, prove a certain amount of ‘work’ has been completed, gets to validate the next set of transactions and add that block of transactions to the blockchain. For their efforts, the winning miner is rewarded with a BTC reward which is referred to as a block reward. For individual miners, it can take up to 1 year to mine a single Bitcoin. Importantly, the chance of winning a block reward increases with the amount of computing power that a miner can deploy; often referred to as hash rate.

Related: What is Bitcoin and how does it work?

Historically, one ASIC miner could produce enough mining power to give users a chance of winning a block reward. However, there are now hundreds of mining companies globally that deploy thousands of ASIC miners. As the amount of mining power, or hashrate, is proportional to the chance of winning a block reward, individuals with only one or a couple of ASIC miners simply cannot compete. The graph from Blockchain Explorer shows the relative measure of how difficult it is to mine a new block for the blockchain is shown below. The issue of competition is exactly why Bitcoin mining pools were created.

What Is A Bitcoin Mining Pool?

Mining pools are usually established by a centralized entity that maintains operations. For their services, a proportion of all mining rewards are collected as a fee. Although a fee is required, by combining resources, a pool of miners has a far greater chance of earning Bitcoin block rewards when competing against larger mining companies.

Mining pools are also designed to be much more user-friendly than establishing an independent node on the Bitcoin network. The process of joining a Bitcoin mining pool can be completed far more once the hardware is up and running.

How Do Bitcoin Mining Pools Work?

Bitcoin mining pools allow miners to receive block rewards that are proportional to the amount of computing power contributed. This contribution is often referred to as a share. A share is defined as every attempt a miner makes to solve the PoW mathematical formula. The aim is to crack the formula and, therefore, find a valid block. Each attempt is acknowledged and when a block is eventually found, the number of attempts is used to calculate an individual’s reward.

After a Bitcoin block reward is found, the associated transactions must be validated and sent to the Bitcoin network. It is then verified by other nodes in the network and, if accepted, is attached to the blockchain. The pool operator then calculates each user’s contribution and distributes BTC rewards accordingly.

How Do Miners Split The Rewards?

Reward payouts are determined by the underlying payout scheme employed by the mining pool. Most of the popular Bitcoin mining pools follow two broad payout schemes which are Pay-Per-Share (PPS) and Pay-Per-Last-N-Shares (PPLNS).

Pay-Per-Share (PPS) schemes allow miners to generate a guaranteed return that is proportional to the hashrate contributed. Rewards are distributed even if the mining pool does not find a block and earn a block reward.

The number of shares required to find a Bitcoin block reward is estimated by the PPS mining pool operators. For example, assume that it takes 100 shares on average to find a Bitcoin block. The reward for block discovery is then also estimated. This is calculated by using the total number of miners in the Bitcoin network and the current Bitcoin mining difficulty. Again, for this example, assume that the block reward is $100.

Using these network estimations, rewards are then proportionally distributed to miners depending on the number of shares contributed. If a miner contributed 5 shares out of a total of 100, the miner would receive a $5 reward - regardless of if the pool found a block or not. Mining pool operators take on this payout risk in return for a participation fee.

Some mining pools also offer Full-Pay-Per-Share options. In addition to the block reward, transaction fees collected from the Bitcoin network are also distributed which can further increase miner rewards.

Pay-Per-Last-N-Shares (PPLNS) is the second most common payout method for Bitcoin mining pools. Unlike PPS, there is no guaranteed payout with this method. Instead, rewards are only distributed once a block is found. In addition to only receiving rewards once a block is found, the number of shares required to find a block is usually set to twice the difficulty level. This is better known as ’N’.

For example, assuming that based on the current Bitcoin difficulty it takes 100 shares to find a block, the number of shares used to calculate rewards within the PPLNS method would be 200. Rewards would then be distributed in proportion to the number of shares that are contributed over that 200. Using a larger number of shares (N) encourages miners to stay loyal to one mining pool. Paying out only when a block reward is found also means that fees are much lower.

Is PPS or PPLNS Better For Bitcoin Mining Pools?

Neither payout option is better than the other and both offer distinct advantages. Choosing a method depends on individual payout preferences. PPLNS can offer slightly higher returns but miners will need to accept the higher volatility and inconsistency of payouts. Meanwhile, PPS will offer stability and a steady return, but the rewards captured may not be as high.

What Equipment Do You Require?

The process of mining Bitcoin requires specific hardware. Although Bitcoin mining could be originally completed using central processing units (CPUs) and graphic processing units (GPUs), the minimum hardware now required is known as an ASIC (Application Specific Interface Circuit) miner. ASIC miners are hardware dedicated to solving the Bitcoin mining algorithm. They perform no other function, which allows for extreme efficiency. Without one, a user's computing power will unlikely be high enough to warrant joining a mining pool.

Related: How to build an ASIC mining rig.

Although resources in a Bitcoin mining group are pooled, a user's rewards are still proportional to the amount of computing power that can be provided. The more computing power that a user can offer to a mining pool, the more rewards the user will receive. The cost of electricity also needs to be factored into reward calculations. The lower the cost of electricity, the higher rewards will be.

To connect the mining rig to the Bitcoin blockchain network, specialized software is also required. The dedicated software can also be used to monitor the status and performance of the miners. Aspects such as power consumption, fan speed, overclocking for GPU devices, and Bitcoin earnings can be monitored using the software. For a list of the best-rated Bitcoin mining software, read our comparison article next.

Before investing in Bitcoin mining equipment, use a Bitcoin mining calculator to determine what returns could be expected from specific hash power outputs. Most calculators require the TH/s output of a chosen ASIC miner, the cost of electricity, and the mining pool maintenance fees. The outcome will provide an estimate of how long a mining rig will need to be operational before it starts generating pure profit.

How To Join A Bitcoin Mining Pool

After deciding to join a Bitcoin mining pool, the next step is to connect the mining hardware. Although each mining pool interface will be slightly different, the steps involved to join a BTC mining pool are similar.

These are the most popular Bitcoin mining pools available on the market.

The image below from BTC.com shows the dominance of Bitcoin mining pools by a percentage of distribution over the last 52 weeks. AntPool, F2Pool, Poolin, ViaBTC and Binance Pool make up the largest percentage of the distribution. 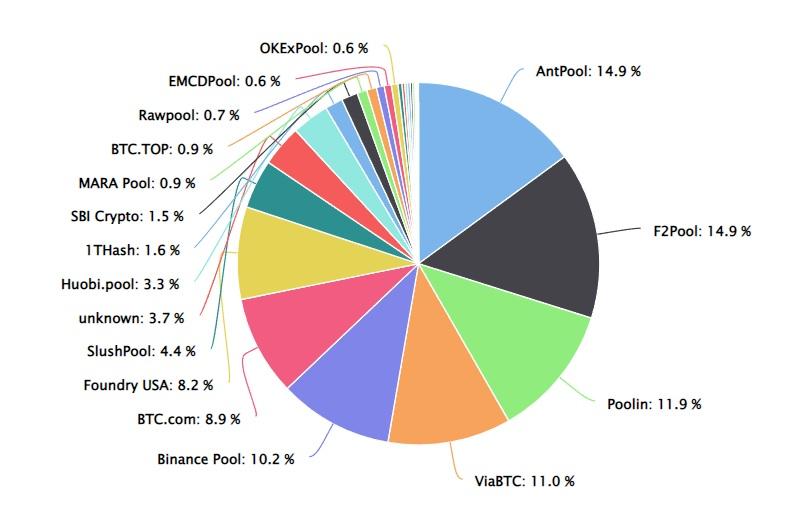 How To Choose A Bitcoin Mining Pool

When searching and comparing the best Bitcoin mining pools, there are four key factors to consider before joining. These include the reputation of the company, the mining pool fees, the pay-out scheme and where the mining equipment is located.

Before signing up for a Bitcoin mining pool it is important to assess the potential upsides and downsides. Although mining pools can increase rewards, some users might not be comfortable with the restrictions that must be followed.

There are now hundreds of Bitcoin mining pools to choose from so it is important to understand the fundamentals of each. Start by understanding what payout scheme each mining pool employs. Understanding how rewards are calculated and distributed should factor heavily into which pool should be used. Alongside the payout options, determine what fees are charged and what the reputation of the pool is within the mining community.

What Is The Bitcoin Halving? A Simple Definition For Beginners

What is the Bitcoin halving and what does it mean for you? In this article, we explain what the bitcoin halvening is and how it impacts the ecosystem.

There are a maximum of 21 million Bitcoins that will ever be mined. So how many Bitcoins are left and what happens when the last BTC is mined?

Can Bitcoin Be Hacked & Is Bitcoin Safe To Use?

Is Bitcoin safe and can it be hacked? This article will explore these questions and the basics of Bitcoin's security and how secure it is.

What Is The Bitcoin Halving? A Simple Definition For Beginners

What is the Bitcoin halving and what does it mean for you? In this article, we explain what the bitcoin halvening is and how it impacts the ecosystem.

There are a maximum of 21 million Bitcoins that will ever be mined. So how many Bitcoins are left and what happens when the last BTC is mined?

Can Bitcoin Be Hacked & Is Bitcoin Safe To Use?

Is Bitcoin safe and can it be hacked? This article will explore these questions and the basics of Bitcoin's security and how secure it is.