Coins like Dogecoin, Solana, and Cosmos rocketed from being practically worthless to becoming some of the top cryptocurrencies by market cap, catapulting their holders into riches. However, the volatility of crypto goes both ways – and just as many have lost a handsome sum to the digital currency market.

How Many Crypto Millionaires Are There? 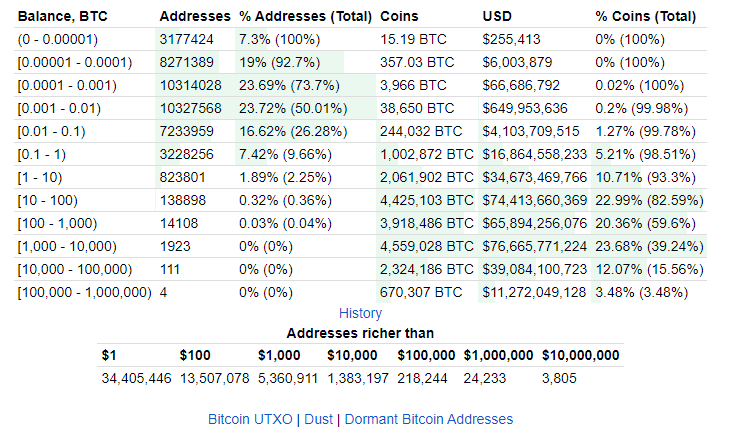 Ethereum’s database is public, so we can peek into some of the top ETH wallet addresses. According to WhaleStats, the top 5,000 Ethereum wallets by value hold an average of $8,708,428 ETH. At Ethereum’s current price of approximately $1,250, investors would need to be holding at least 800 ETH to be considered millionaires.

By analyzing Etherscan, we can see that there are approximately 8,350 wallet addresses holding more than 800 ETH and worth more than 1 million – so less than Bitcoin, but still a substantial amount. The most valuable Ether wallet address currently holds approximately 16 million ETH – equivalent to about USD $20 billion.

Related: What is Ethereum and what does it do?

During periods of intense market volatility, like 2022-2023, many crypto investors move their holdings into stablecoins. This helps them avoid day-to-day price fluctuations while keeping their assets on the blockchain. For example, there are well over 100 Tether (USDT) wallet addresses with more than 1 million tokens being held.

How To Calculate How Many Crypto Millionaires They Are

Cryptocurrencies by and large exist on a public blockchain ledger which is essentially a database of all transactions and coin ownership that is accessible to anybody. By researching single blockchains using tools such as BitInfoCharts which sorts information from the Bitcoin blockchain, it is theoretically possible to calculate how many crypto millionaires currently exist.

How Do People Become Crypto Millionaires?

There are several ways that people have become crypto millionaires. For investors, the easiest would’ve been to invest in crypto such as Bitcoin before 2013, when the asset only just exceeded $1,000 in value. A ~$64,000 investment in BTC in December 2013 would have grown to around a million USD by 2023. If we go back even earlier, to December 2010, the price of BTC was just 30 cents. People that made a tiny $20 investment then, would have become Bitcoin millionaires today – assuming they held.

During frenzied bull runs like 2021, some of the top meme coins with little utility often see massive swings in price as novice investors try to strike gold before anyone else does. Because their values are often just a fraction of a cent, these currencies can rise 10,000%+ in a manner of hours. However, these projects don’t offer much real-world value and are susceptible to emotional, hype-based investing. When the hype dies down, the coins will often drop in value even faster than they went up, leaving the day-old “millionaires” penny-less. 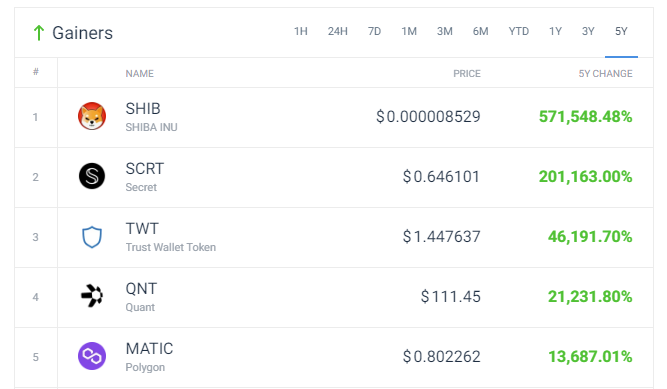 Shiba Inu (SHIB) has seen the highest growth in value of any cryptocurrency over the past five years – and is still worth less than a hundredth of a cent.

Another common crypto millionaire story, which takes a lot more expertise and skill, is by trading crypto. The digital currency market's innate volatility can make it intimidating for longer-term, first-time investors. However, these same fluctuations provide experienced traders with significant trading opportunities. Whether it be through swing trading, scalping, shorting coins in bear runs, or trading derivatives with margin, crypto markets have turned many part/full-time traders into millionaires.

Want to start trading? Here is our list of the best crypto trading exchanges.

Finally, many crypto millionaires have already established fortunes that they’ve used to venture into the crypto industry. This includes celebrities and businesspeople like Elon Musk and Mark Cuban. Others have made their fortune from crypto-related projects, like launching a successful blockchain or centralized exchange.

How Can I Become A Crypto Mllionaire?

There is no guaranteed way to become a crypto millionaire. The digital currency market is notoriously rocky and may never hit the heights of the previous bull cycles again. However, there are some solid underlying investment principles that apply to all markets. They may not make people overnight millionaires, but they can help make an informed decision with as little risk as possible to build wealth over the long term.

These three potential investment strategies should not be considered financial advice. Rather, they are an overview of commonly-used tactics for capitalizing on the crypto market that can lead to building a million-dollar crypto portfolio.

Fundamental analysis involves researching a cryptocurrency to determine whether it is over or undervalued. This might involve analyzing the coin’s associated blockchain, its underlying technology, its supply, token distribution and use-case, and more. Other elements to consider include hash rate (for Proof of Work coins), transactions per second (TPS), gas fees, and liquidity.

The goal of fundamental analysis is to find cryptocurrencies that are worth less than the intrinsic value they offer. For example, Bitcoin could be considered undervalued in the early 2010s as it provided a digital store of value without the need for an intermediary – something society was crying out for after the banking collapse of 2008.

Finding a crypto project with solid fundamentals should be the primary goal for most investments. Such ventures are more likely to weather harsh crypto winters thanks to their real-world utility and strong performance metrics. Being able to uncover a particularly sound crypto project while it’s still in its infancy could form the basis of a million-dollar investment portfolio.

Technical analysis (TA) is typically used by advanced traders, but there are principles even beginners can follow. TA is the use of cryptocurrency charting software (like TradingView) and indicators to try and uncover trends in the price of a cryptocurrency. Indicators are often used in conjunction with one another to identify possible price reversal or continuation based on price action.

When a trend has been confirmed, this can lead to all manner of trading strategies. Some may prefer swing trading and following the trend over a few days. Others might use a scalping strategy, where traders sell cryptocurrencies almost immediately after their trade becomes profitable. The initial returns may be low, but continued use of the strategy may accumulate solid gains.

Technical analysis requires a solid level of skill, understanding, and upfront capital to be profitable. Trading crypto, especially with margin and leverage platforms, is an easy way for the inexperienced to lose all of their money quickly.

Dollar-cost averaging (DCA) is a common crypto investment strategy employed by beginner and advanced investors. The goal of this strategy is to accumulate a portfolio over time – regardless of an asset’s price. For example, someone might set aside $100 to invest in BTC and ETH on the 2nd Monday of every month, no matter what the cryptocurrency market is doing.

Over time, this strategy exposes the investor to less of the crypto market’s innate volatility and helps them simply add to their holdings. The power of compound interest could theoretically lead a well-balanced portfolio into the millions after years of consistent growth.

Who Are The Richest Crypto Millionaires?

Satoshi Nakamoto is the crypto world’s longest-running mystery. The very person who invented the blockchain as we know it has never once revealed their identity, instead choosing to hide behind the veil of the Nakamoto pseudonym. In spite of their anonymity, one thing that’s public is the amount of BTC Nakamoto mined – an absurd 1.1 million (equivalent to $18.5 billion USD). Satoshi is the world's largest Bitcoin millionaire.

Changpeng Zhao (CZ) is one of the richest crypto billionaires in the industry. The Chinese-Canadian businessman founded Binance in 2017, which rapidly blossomed into the world’s largest crypto exchange by essentially all metrics (volume, monthly visits, active userbase, etc.). He owns approximately 70% of Binance’s shares and was also integral to the creation of Binance Smart Chain, the exchange’s associated blockchain. CZ’s net worth is estimated at $4.5 billion – but has likely exceeded $100 billion during bull markets.

Any movie buffs that have seen The Social Network will likely know about the Winklevoss Twins. The brothers attended Harvard around the same time as Mark Zuckerberg and created a precursor to Facebook called “ConnectU”. The duo sued Facebook and ended up receiving ~$65 million from the out-of-court settlement.

The twins, after retiring from Olympic rowing, used much of this settlement to become early investors in BTC – massively inflating their already large net worth. They went on to create the now-defunct crypto lending exchange Gemini, which was bankrupted by the FTX collapse contagion. In spite of their business failing, the twins have a combined net worth of approximately $6 billion.

Vitalik Buterin is one of the blockchain industry’s most respected figures and has been participating in the sector since co-founding Bitcoin Magazine in 2011. Buterin, although a believer in blockchain technology from the start, acknowledged that Bitcoin’s implementation of it had a few significant flaws.

He set out to create Ethereum and the project quickly rose to become the second-biggest crypto by market cap, and its blockchain is used by thousands of coins and decentralized applications. Buterin’s work ushered in a new era of decentralized finance, and he was rewarded handsomely for his efforts. As of writing this article, the 29-year-old is a crypto billionaire, with an estimated net worth of $1.5 billion.

One of the biggest challenges to becoming a million-dollar crypto portfolio is self-emotions. Extreme swings can see USD-dominated portfolio valuations rise and fall quickly. Therefore, resisting the urge to suddenly buy or sell based on emotional triggers can help preserve a portfolio and allow it time to appreciate in value during the next cycle.

Investing in cryptocurrencies such as Bitcoin, Ethereum, and Dogecoin at a very early stage. The price evaluation is often pennies on the dollar when first released on the market. As the market matures and speculation grows, the price for each coin can increase by thousands of percent. Alternate methods to become wealthy in crypto include trading or participating in crypto pre-seed blockchain companies.

A popular investing strategy to protect a cryptocurrency portfolio is hedging to protect against volatility. This involves shorting Bitcoin and other coins to offset potential losses in asset value during a correction.

The number of crypto millionaires changes with the USD price of Bitcoin and other digital assets. For example, there were more than 150,000 crypto wallets valued at more than 1 million during the bull run in 2021. However, there are only 32,583 wallets worth the same amount at the time of writing due to declining prices.

It’s difficult to pinpoint exactly how many crypto millionaires there are. However, we do know there are at least 32,583 millionaires as of 2023 – and likely many more. Given the frequent and wild fluctuations in the crypto market, millionaires can be made and unmade overnight. Those smart (or lucky) enough to invest in BTC in its early days would only need to have put aside $20-30 to be millionaires today.