Home
Bitcoin
Can Bitcoin Be Hacked? Is Bitcoin S...

Can Bitcoin Be Hacked? Is Bitcoin Secure In 2022?

With an $875 Billion dollar market cap, there is a high financial incentive for hackers to steal Bitcoins. However, since its launch in 2008, the Bitcoin network has never been hacked or compromised. It is extremely difficult to breach the Bitcoin peer-to-peer (P2P) network due to its inherent security design. The application of unique private keys and digitally encoded transactions that are protected by Elliptic curve cryptography are near-impossible to successfully penetrate. So, is Bitcoin hackable?

For Bitcoin to be hacked, a mathematical shortcut would need to be developed to compromise an owner's Bitcoin private key, or an event that would disrupt the public ledger to rewrite transactions. To date, no one has exploited any vulnerabilities in Bitcoin, however, the asset should never be taken for granted as being 100% safe and un-hackable. There are always security risks that still need to be considered to keep Bitcoin safe, particularly when buying or selling Bitcoin using a cryptocurrency trading platform.

Blockchain technology is the underlying security infrastructure of Bitcoin and other digital currencies that prevents value being sent across the network from being stolen, duplicated or destroyed. The strength of the Bitcoin network lies in the high degree of trust, confidence and transparency of all transactions. The Bitcoin network is protected by SHA-256 encryption for both its Proof-of-Work (PoW) system and verification of transactions that removes the possibility of duplicate transactions.

The information is broadcast across a vast network of computers known as nodes. The computer networks continuously check and verify that the records are accurate. Therefore, a large number of nodes around the world would need to be compromised to hack the Bitcoin network.

How Can Bitcoin Be Breached?

The decentralized nature of the blockchain makes Bitcoin extremely difficult for unauthorized third parties to access Bitcoin transactions. A low likelihood, but possible scenario to breach Bitcoin is using a 51% network attack. Hackers would need to compromise miners that control more than 50% of the Bitcoin network's mining hash rate. This would allow the hackers with majority control of the network to interrupt the validation of new blocks and preventing other miners from completing blocks.

Smaller networks that use PoW and have a smaller hash rate can be vulnerable to a 51% attack. For example, Ethereum Classic was compromised 3 times by a 51% attack in September 2020. The attack compromised over 14,000 blocks on the network that resulted in a double-spending of 807,260 ETC, which was valued at $5.6 million. The hackers spent 17.5 BTC ($192K) to acquire the hash power for the attack. Other cryptocurrency projects that have been compromised by similar attacks include Monacoin, Bitcoin Gold and ZenCash.

What Is A 51% Bitcoin Network Attack?

A 51% Bitcoin attack involves a group of miners that take control of more than 50% of the network’s mining power, computing power or hash rate. A successful 51% attack would allow the attacker to prevent new transactions from occurring or being verified on the blockchain for their financial benefit, including earning all the block rewards.

In the event of a 51% attack on Bitcoin, the attacker can't reverse existing transactions that have already been verified by other miners and broadcast to the network, change the block's reward, create new coins or steal coins that are not owned by the attacker.

How Likely Is A 51% Bitcoin Attack?

Bitcoin uses a Proof of Work system that involves a large group of individuals collaborating to verify transactions on the network. The security of the Bitcoin network is correlated to the size of the network which results in higher mining hash rates and provides greater protection against corruption of the public ledger using a 51% Bitcoin attack.

A miner or group of miners would need to invest a significant amount of network mining power given the size of the network. With the increase in the adoption of Bitcoin, the probability of an attacker obtaining the resources to overtake the other miners decreases rapidly each day to near-impossible. As Bitcoin miners are compensated for validating transactions on the network by earning block rewards which are currently 12.5 BTC per block, there is minimal financial incentive to disrupt their own mining business or invest in large computing power to alter a few blocks. This incentive is further reduced after each Bitcoin halving where the reward per block is cut in half.

To date, Bitcoin has never been hacked or compromised since the first Bitcoin was mined in 2008 by Satoshi Nakomoto. The SHA-256 encryption used by Bitcoin for the Proof-of-Work (PoW) system and verification of transactions has so far stood the test of time and remains hack-proof. However, this does not rule out that Bitcoin will never be breached in the future with advancements in quantum computing to crack the mathematical code used in cryptography.

The biggest vulnerability is associated with buying, short selling Bitcoin and storing of the asset by owners and using centralized cryptocurrency exchanges. Exchanges use "hot-wallets" which are connected to the internet to facilitate the deposit and withdraw of Bitcoin to and from the trading exchange, or to a personal hardware wallet.

While the number of successful of crypto exchange that have been hacked is decreasing due to bank-like security features, several currency exchanges are still hacked each year. According to our research, almost $2.5 billion worth of various cryptocurrency has been lost since 2014 due to hackers, individuals and cybercrime organizations alike. The most famous incident is the Tokyo-based Bitcoin exchange Mt. Gox that filed for bankruptcy after losing a reported $460M worth of Bitcoin. More recently, in September 2020, more than $270 million in assorted cryptocurrencies was stolen from the crypto exchange Kucoin. 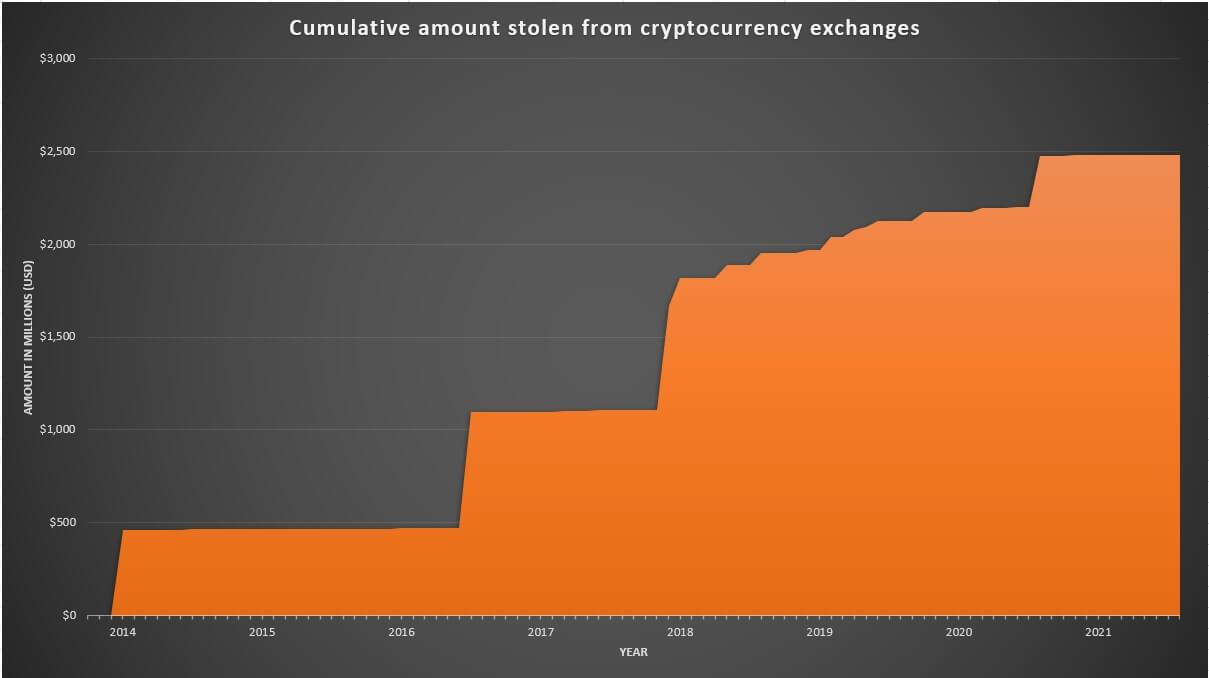 Blockchain technology is the underlying security feature of Bitcoin and many other cryptocurrencies. It is often touted for its security, however, the blockchain network can become vulnerable to attack under certain situations. Bitcoin can be hacked if a large miner or group of miners that conduct a 51% attack when the network usage is at its lowest. The likelihood of this form of attack is becoming less probable with the increasing global hash power through wider adoption.

The most common security issue with Bitcoin is associated with individuals and exchanges that do not implement adequate safety measures to combat modern cyber-security risks. While Bitcoin is considered a trustworthy, safe and secure network for the transfer of wealth, individuals and investors should always buy Bitcoin from a reputable exchange and store on a hardware wallet.