Table of Contents
What Does FOMO Mean In Crypto?What Is FUD?Conclusion

Research has shown that approximately 39% of investors that trade crypto in the U.S are Millennials between the ages of 25-34 years. Quite peculiar and worthy of this generation, they have coined a whole new lexicon in the crypto market, commonly referred to as ‘crypto-slang.’ As a result, we often run into perplexing crypto jargons (or slang) on platforms like Twitter, Discord, and Reddit that support crypto communities.

FOMO and FUD are two such expressions that have become excessively common and relatable among crypto users. Although born out of the same emotion – “FEAR,” the meaning of both these words are quite different in their meaning.

What Does FOMO Mean In Crypto?

The slang FOMO stands for “Fear of Missing Out” which is commonly used in the context of the crypto market or stock trading in general. The expression is used to refer to the feeling of anxiety and fear of missing a potentially lucrative investment or trading opportunity.

The concept of FOMO is directly extracted from a personal human emotion. It is the fear of missing out on something that others enjoyed. Undeniably, the crypto market thrives more on emotions than fundamentals. FOMO often drives crypto investors to make poor trading decisions because of their emotions which can result in losing money.

Related: What Is Cryptocurrency: 11 Interesting FACTS To Know

Crypto investors can experience the effects of FOMO in two common scenarios:

Since the crypto market is largely emotion-driven, every rumor, opinion of an influential personality, or news report can lead to a sudden surge in the market cap volume and price movement higher without a change in fundamentals. This type of market causes investors to experience FOMO and rush into a position they may not otherwise have entered into. 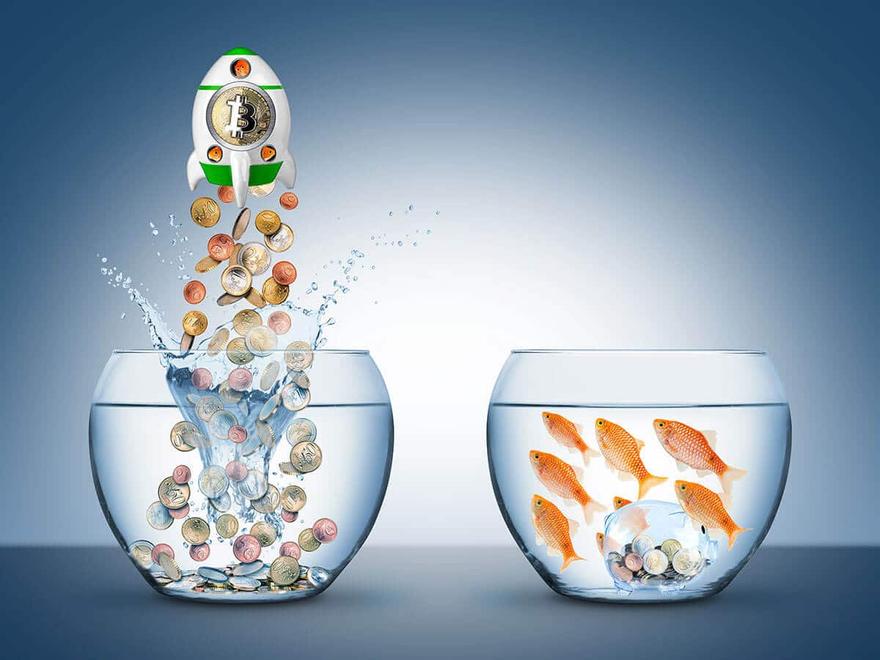 An Example of FOMO

An example of a typical FOMO even occurred during the Bitcoin bull run of October-November 2020. Bitcoin was on a seemingly unstoppable ascent beginning October 2020, at BTC $10,000, till it reached $20,000 at the end of November. Buoyed by an increase in institutional interest after PayPal announced their custodianship and the weakening dollar, the bull run caused extreme FOMO among investors.

How To Overcome FOMO?

The fear of missing out on a trade is a significant cause to the majority of investors and traders giving profits back to the market. In particular, using leverage markets to trade crypto can compound losses that can exceed the initial starting amount. To combat the feeling of FOMO, here are a few tips for cryptocurrency traders to employ that will reduce the effects of emotions:

Moreover, there are crypto fear and greed indicators that track the overall sentiment of the participants in the market. This can be a helpful visual tool to show the level of fear and greed of other individuals. Buying when the index is at extreme greed can be risky. This is the point of highest financial risk as the market will often correct.

FUD is an acronym or slang term that stands for “Fear, Uncertainty, and Doubt”. Within the cryptocurrency industry, FUD can be used to influence, manipulate and modify the perception of market sentiment in a negative way among investors and traders. There are instances where parties will spread false, misleading and negative information to cause FUD for their financial benefit.

The Origins of FUD

Mr. Gene Amdahl, a mainframe computer architect, is said to have popularized the term FUD back in the 1980s. He blamed the IBM sales team for instilling FUD in the minds of his potential customers by calling their competitor’s products unreliable and untrustworthy. Since then, FUD has become a classic PR and propaganda tactic. The idea aims to wrap public perception of a product, company, or technology by strategically spreading misinformation to garner a negative emotional response.

What Causes FUD In Crypto?

Crypto investors can experience the effects of FUD in two common scenarios:

News events and headlines that contain false information or negative connotations without fact can trigger an emotional response to alter the perceived price value of a cryptocurrency. Quite often, the release of false news will cause a sudden or gradual price decline without a change in fundamentals that are driven by ‘fear, uncertainty and doubt’ in the minds of the participants.

To conclude our article on the meaning of FUD and FOMO, as investors we all need to understand that we are human beings. As such, we can be influenced by the emotional rollercoaster of trading Bitcoin or altcoins. It is perfectly normal to experience the effects of the fear of missing out and fear, uncertainty and doubt. However, to increase profitability by investing in cryptocurrencies, it is highly recommended to reduce emotion-based trading. As a final note, sticking to a well-defined trading strategy, turning off social media, and using a premium cryptocurrency charting platform is a great place to start.

9 Best Fiat To Crypto Exchanges In 2022Looking for the best way to convert fiat into crypto? We have found and compared the top trading platforms in the world in this article.

9 Best Fiat To Crypto Exchanges In 2022Looking for the best way to convert fiat into crypto? We have found and compared the top trading platforms in the world in this article.